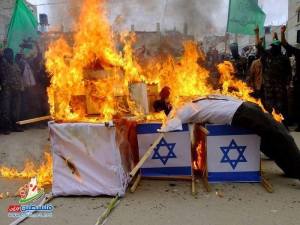 Hamas burns an effigy of a Jew this week in celebration of the terror group’s founding. (Photo: IDF)

Will Hamas get off on a technicality? The EU is removing Hamas from its list of terror organizations – temporarily, they say – due to an error in protocol.

The list is legally binding and prohibits European Union (EU) members from maintaining ties with Hamas.

The Court explained that the decision hinges on a technicality, as the submission of Hamas’ name to the list in 2003 was not done in accordance with protocol.

A diplomatic source in Brussels told Channel 10 that he was dismayed by the decision, which was received in the past few days without any prior briefing. Some diplomats learned only on Tuesday that such a problem existed.

The report stresses that this decision is not critical, as the EU cannot determine through its court that Hamas is not a terror organization. However, it is a serious clerical foul-up, and it is unclear when it will be rectified.

The EU reportedly clarified to Jerusalem that the procedure involved a mere technicality and that its stance regarding Hamas has not changed. Channel 10 has learned that Israeli diplomats have been working in the past months to minimize the damage.

Aviv Shiron, a deputy director at the Foreign Ministry, told IDF Radio that new evidence against Hamas has already been submitted to the European court and that “the issue is an internal European affair.”

The EU reportedly told Israel’s Foreign Ministry that it will do all it can to reverse this regrettable decision as soon as possible, asking Israeli officials not to turn the issue into a major incident.

Prime Minister Benjamin Netanyahu harshly condemned the move, stating: “We are not satisfied with the European Union’s explanation that the removal of Hamas from its list of terrorist organizations is a ‘technical matter.’ The burden of proof is on the European Union and we expect it to put Hamas back on the list forthwith given that it is understood by all that Hamas – a murderous terrorist organization, the covenant of which specifies the destruction of Israel as its goal – is an inseparable part of this list. We will continue to fight Hamas with strength and determination so that it never achieves this goal.”