Costumes and dressing up are major components of Purim celebrations, as many of you know. But why is this so?

Before I go into the different reasons and interpretations as to why we wear Purim costumes, I’ll tell you right now that we don’t dress up in order to go “trick or treating!” Yet I do hope that this article will be a real “treat!”

There are several reasons that we don Purim costumes. One is because Purim represents “the hidden.” Unlike Passover, for example, where the story and miracles are obviously supernatural, the miracles of Purim are not so obvious.

In the Book of Esther, which tells the story of Purim, there are no seas splitting, no frogs jumping in the king’s bed and no revelation upon a mountain. Rather, the sequence of events is a string of “coincidences” that read much like a Shakespearean play, including a drunken king, a beautiful queen, an evil villain, a plot to destroy the Jewish people and, finally, a Jewish hero who saves the day. God is nowhere to be found. His name does not appear once in the Book of Esther. He is completely hidden in between the lines of these “coincidences” where everyone “coincidentally” appears at the right place at the right time.

It is in the spirit of all the above that we wear Purim costumes. Just like God was hidden in the miraculous salvation of the Jewish people, we too hide ourselves on Purim to recall that even when it’s not so obvious, God is always there. 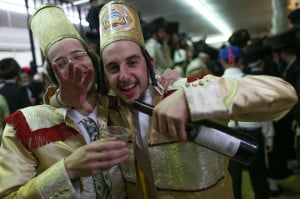 Another reason offered is completely different. Giving money to charity is a major part of the Purim celebrations. Those who are needy go door to door over the course of the holiday, asking for money. They also go from synagogue to synagogue during services. Indeed, there is probably far more “clanging and banging” of coins heard in houses of worship than there are “Amens!”

As such, a number of commentators suggest that the wearing of Purim costumes is in order to allow these poor and unfortunate people (along with everyone else in the community) to dress up and hide their identities while collecting charity. In this way, their dignity is better preserved.

In a similar vein, perhaps it can be suggested that the wearing of Purim costumes also preserves another form of dignity. Drunkenness –responsible drunkenness — is also a major part of the celebrations. And we know what happens when some people get drunk – they act like monkeys, to say the least! As such, by wearing Purim costumes, one’s dignity (identity!) may be better protected in the event that one says or does things that, well, only a monkey would do.

COME AND JOIN THE FUN!

Finally, another reason is to recall the many times in the Book of Esther that references are made to royal garments and fine fabrics. We read about the lavish tapestries at all the parties, the clothing that King Achashverosh wore, the outfits that Mordechai was dressed in, and much more. For this reason, many people endeavor to wear higher-quality Purim costumes conveying themes of wealth and royalty.

There you have it. Now that you know why we wear Purim costumes, I hope you will participate in this entertaining custom as well!