The IDF resumed its military operation in Gaza after Hamas yet again rejected a humanitarian ceasefire for the people of Gaza. Prime Minister Benjamin Netanyahu and Defense Minister Moshe Ya’alon on Sunday ordered the IDF to resume operations against the Hamas terrorists who violated the humanitarian truce that the UN had requested for the residents of Gaza.

Despite rockets and mortars fired at several civilian targets Saturday night, which severely wounded an Israeli civilian, Israel’s Security Cabinet had originally voted to extend the humanitarian ceasefire for another 24 hours at the UN’s behest, ending Sunday at 9 p.m.

“Following Hamas’ incessant rocket fire throughout the humanitarian window, which was agreed upon for the welfare of the civilian population in Gaza, the IDF will now resume its aerial, naval and ground activity in the Gaza Strip. The IDF has repeatedly called out to the civilian population of Gaza not to approach combat zones,” said an IDF spokesperson. 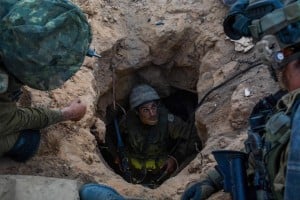 Israeli soldiers from the Givati brigade seen at the entrance to a terror tunnel. Even during a ceasefire, the IDF works to locate and destroy the tunnels. (Photo: IDF Spokesperson/FLASH90

“The IDF targets terrorist centers, but if residents are inadvertently hit, it is Hamas which is responsible, given that it has – again – violated the humanitarian truce that Israel acceded to,” he added.

Even while observing the ceasefire, IDF forces remained in Gaza to continue dismantling the terror tunnels. The result from Saturday’s operations was that the IDF unearthed four new tunnels. Each was mapped out, and specialized forces are learning how to efficiently neutralize these threats. Hundreds of terrorist weapons were found in homes, schools, mosques and hospitals throughout Gaza In total, 48 IDF soldiers have been killed in the fighting.

Since midnight, three rockets fired from Gaza hit southern Israel. Over the weekend, more than 22 rockets were fired from Gaza; at least 16 hit Israel. Sixrockets were intercepted by the Iron Dome missile defense system. The IDF struck over 40 terror targets in the Gaza Strip.

Since the start of Operation ‘Protective Edge’, more than 2,450 rockets and mortars were fired at Israel. The IDF has targeted over 3,747 terror targets with ground, naval and aerial capabilities, including 31 tunnels.