Hundreds of thousands came from across the country – religious and secular, young and old – to pay their respects to three boys murdered by Hamas terrorists. 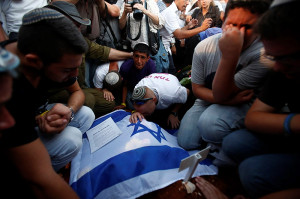 Eyal Yifrach, Gilad Sha’ar and Naftali Frankel, the three Israeli teenagers kidnapped and murdered by Hamas operatives on June 12 but whose bodies were discovered only yesterday, were laid to rest in the Modi’in cemetery on Tuesday evening.

Hundreds of thousands attended; busloads of people arrived from all over the country and walked for almost an hour from the drop-off point to the burial site, where the boys would be interred side by side.

The bodies were wrapped in Israeli flags.

The grieving crowd included people from all walks of life – ultra-orthodox, nationalist-religious and secular – as well as diverse age groups. It was remarkable to see elderly people make the long trek in order to pay their respects. Indeed, it felt like one large family mourning for their beloved boys.

Rabbi Dov Zinger, dean of Yeshivat Mekor Chaim, where Gilad and Naftali were students, said that the Frankel, Sha’ar and Yifrach families succeeded in unifying the country.

“Rest in peace,” said Ashkenazi Chief Rabbi David Lau. “Many youth accompany you today with a promise that we are continuing… in the land that is an inheritance.”

“We are an ancient people, united and deeply rooted,” President Shimon Peres declared. “Our story is full of tears but the soul maintains the Torah. These three boys exposed the depth of our people and the heights it can reach. A nation with a soul that yearns. A nation which demonstrates resilience like no other. A nation that even in its years of exile never lost its way.” “The nation understood immediately the depth of the roots and the strength of spirit you possess,” Prime Minister Benjamin Netanyahu stated, addressing the families. “The whole nation stood together and received a reminder – Who are we? Why are we here?”

“The entire nation cries and embraces you,” Netanyahu said.

A funeral procession for each of the boys was held in their hometowns before the larger event in Modi’in.