Zorah was the hometown of Samson, the strongest man who ever lived.

“The Spirit of G-d began to resound in him (Sampson) in the camp of Dan, between Zorah and Eshtaol (Judges 13:25).”

Today, we are going to visit a special Biblical site that few people are aware even exists. It is close to my residence, and I am able to see it from several spots in my neighborhood. This site, nestled in the tranquil, hand-planted President’s Forest, offers stunning views from the top!

When the children of Israel entered the Holy Land, the country was divided by the tribes, according to divine lottery. Zorah was given to the Tribe of Dan (Joshua 19:41).

Zorah was the hometown of Samson, the strongest man who ever lived.

The Angel and Samson’s Parents

His righteous mother was barren, constantly praying for a child. As she was sitting in the field just outside the town, a man (an angel, unbeknownst to her) appeared and told her that she was to have a child. This child would save the Jewish people from the hands of the Philistines, who at that time were oppressing them.

She then quickly ran home to tell her husband Manoah about what had just happened. Manoah prayed that G-d would send the man again, so he could ask him how G-d wanted his son to be raised. Although Manoah did not know the stranger was an angel, he knew he was a man of G-d, perhaps a prophet, who would be able to communicate G-d’s will to him.

When the angel reappeared to his wife, she ran to get Manoah who asked the “man” how G-d wanted him to raise his son. The angel replied that their son should never cut his hair or eat anything which comes from grapes, the practices of Nazirites.

Manoah wanted to thank the “man” for the good news and asked him to join them for a meal. But the angel replied that Manoah should offer the food to G-d as an elevation offering. Manoah built an altar and offered the sacrifice (Although according to Torah law, it is forbidden to bring a sacrifice on a private altar when either the Temple or the Tabernacle of Shiloh existed, in individual cases a prophet could command a person to privately offer a onetime sacrifice).

Upon offering the food, a miracle happened, and a flame rose from atop the altar to the heavens and consumed the “man”, whom they now realized was an angel. The couple went on to name their newborn son Samson (Judges 13). 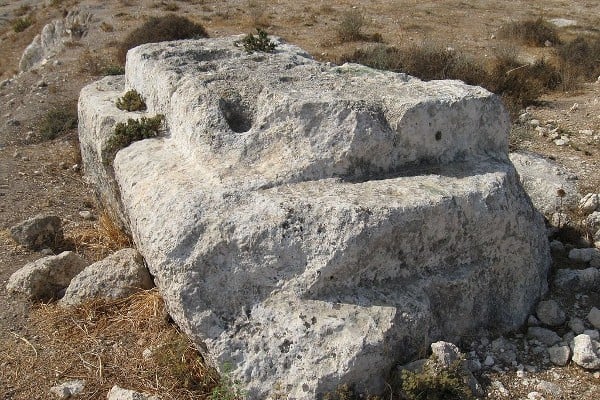 The altar of Manoah can still be seen today. (Wikimedia Commons)

Zorah: Then and Now

One of the most exciting stories in the Bible occurred in the valley directly below Zorah.

Samson was out walking with his parents when they arrived at a vineyard. Since drinking wine was forbidden to him, Samson did not even want to go through the vineyard, choosing instead to walk around it while his parents went through it. As Samson was walking, a lion attacked him (Lions used to be abundant in Israel.) Samson ripped the beast apart with his bare hands (Judges 14: 5-6) .

When Samson died in Gaza, his body was taken and buried by Zorah in the same burial plot as his father (Judges 16: 31).

Interestingly, Jewish sources mention that Samson was lame in both legs. Coincidentally, ground penetration radar was recently used at the Tomb, and the bones were indeed found to be that of a lame person. The place where Samson was attacked by a lion is still an active vineyard. Tourists can visit the winery and sample some of Israel’s finest wines. (Shutterstock)

Centuries later, King Rehoboam (son of Solomon) fearing invasion from the north, fortified many of his cities including Zorah (2 Chronicles 11:10).

In 422 BCE, the Jewish people of the Kingdom of Judah were exiled by the conquering Babylonians, who brought them to modern day Iraq. Fifty years later, the Babylonian Empire was conquered by the Persians under King Cyrus the great, who allowed his Jewish subjects to return to Israel and even rebuild the holy Temple in Jerusalem. Under Jewish leaders Ezra and Nehamiah, 50,000 Jews moved back to Israel, with some of them settling in Zorah (Nehemiah 11: 29).

In 1948 near the ancient ruins of Zorah, Kibbutz Tzora (Hebrew for Zorah) was founded and today is thriving with several successful wineries and businesses.

Due to its central location (between Tel Aviv and Jerusalem), enchanting beauty, and the fact that it is so accessible to many other nearby sites of interest, a stop here can most definitely enhance a visit to Israel!