United with Israel’s annual Passover effort to express thanks and support to IDF soldiers was a huge success this year. Once again, United with Israel’s Passover Partners project has enabled Israel supporters around the world to express gratitude to hundreds of IDF soldiers, not only with essential supplies for the Passover holiday, but also with emotional support and love.

Working in cooperation with Standing Together, UWI members helped to make this project an even bigger success in 2015.

This year, nearly 1000 Passover packages, including staples such as matzoh, wine, grape juice, coffee, tea, cakes, chocolate, fruit and more, were distributed to IDF soldiers and their families. The soldiers were also provided with Haggadahs (Passover Seder recital books) and traditional Seder plates.

Many young IDF soldiers spend the holidays with their families, and some are in need of financial assistance. While dealing with such challenges at home, these courageous young men and women continue to defend the Jewish state day and night. The security of the State of Israel truly depends on them.

While IDF provides each soldier with his or her essential needs, it cannot provide for their families. This is why becoming Passover Partners with these families is so important.

However, the purpose of the ‘Passover Partners’ project goes beyond providing food packages… “We can hardly believe that so many people around the world really care about us,” said one soldier, upon receiving his package.

“Thank you so much from the bottom of our hearts,” said another.

Each army unit includes a social worker, who assesses their families’ needs. These professionals let us know exactly what is required. Therefore, it is the soldiers whose families are in the greatest need that receive the assistance first. 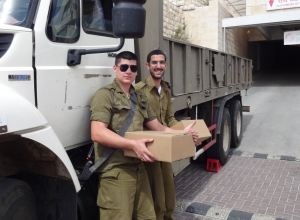 Click here to learn more about the Passover Partners project.

For those who participated in this important project, the soldiers say ‘THANK YOU’ from the bottom of their hearts. Given the current climate of rising anti-Israel sentiment and delegitimization of Israel and the IDF, friends like you are greatly cherished!