The president and first lady hosted 50 youngsters who had lost their closest family to Arab terror in celebration of a coming-of-age milestone event. 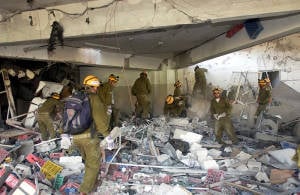 Some 50 children and their families, victims of Palestinian-Arab terror, came together on Monday at the President’s residence in Jerusalem to observe their B’nei Mitzvah – coming-of-age ritual whereby a 13-year-old boy (Bar Mitzvah) or 12-year old girl (Bat Mitzvah) accepts responsibility for observing the laws of the Torah.

President Reuven and First Lady Nechama Rivlin received the children at the end of an exciting and celebratory day, which began at the Western Wall in Jerusalem and concluded with a moving ceremony that included famous Israeli singer Moshe Peretz.

These B’nei Mitzvah, among them three orphans, were directly and ruthlessly affected by Palestinian-Arab terror. All had either lost parents or other close relatives or were wounded by the attacks.

For example, Yigal Paizkov’s parents, Oleg and Ludmila, were murdered in a terror attack on the Hilton hotel in Taba, Egypt, in October 2004. Another 25 people were murdered in that attack. Yigal’s grandparents are raising him and his brother Daniel (19).

Michelle Levine’s parents, Eitan and Rima, were killed in a shooting attack near the Shoket Junction in southern Israel in February 2004. Michelle, an only child, was adopted by her aunt.

Nadav Wolanski’s parents, Abraham and Avital, were killed in a shooting attack in August 2002 in Judea and Samaria. Nadav has an older brother, Yigal (15), who was also injured in the attack.

Paying an Unbearable Price for Independence

Rivlin congratulated the youth, stating: “On this special day, during which you celebrate the acceptance of the commandments, I’m happy to have the privilege to take part in your joyous occasion.”

He touched on the children’s’ unique history, saying that “the Jewish life cycle is a circle ranging from sadness to joy, from joy to sadness. Each and every one of us has experienced in life moments of joy and thanksgiving and moments grief and loss. Even on the happiest of occasions, we do not forget our loved ones – the father, mother, brother or sister who is unable to celebrate with us here today. There is a price to our being Jewish, to our independence. Sometimes, the price is too high, and almost always, the price we pay is unbearable, an unbearable price that each one of you knows first-hand.”

‘The People of Israel Have Never Lost Hope’

One could feel the immense pain in the room, but Rivlin stressed that “there is also a lot of power and strength that should be remembered. Celebrating with us tonight are Orel and Addisu. Orel Yalizarov was mortally injured by a Grad rocket during Operation Cast Lead when he was eight years old. Despite the serious injury and against all odds, through force of will and strength, faith and hard work, you have succeeded, Orel, we are proud and excited to celebrate with you here tonight.”

“Also celebrating with us is Addisu Takla,” Rivlin added. “Addisu’s family immigrated to Israel from Ethiopia with great hopes and dreams for a new beginning in Israel. Addisu and his family also paid a heavy price for being Jewish and living in this country when they lost their mother in a terror attack shortly after immigrating. Orel and Addisu represent all of you here, your life cycle – the sadness, sorrow, joy, constantly dealing with injuries and longing for the beloved family member who will never return. The People of Israel have never lost hope, and our faith has not waned. Thanks to our faith and determination, and above all the knowledge that the responsibility for our fate rests on our shoulders alone, we were able to return to our country and to our homeland.”

Rivlin vowed that “the People of Israel and the State of Israel will accompany you along your way and throughout your adult life. I am sure all of you will be a source of hope and pride to your loving families. On this joyous day I wish for you to continue to hope and to dream big dreams. But mostly I wish you the wisdom to accept with open arms the responsibility placed upon you as mature young adults and for you to create a better world for us all. I am hopeful that this new chapter will open up a positive set of experiences and good memories and will bring good fortune to you and your families. Congratulations.”

‘He is Always in My Heart’

Orel Mamistalov, 12, is the youngest daughter of the late Joseph Mamistalov, a bus driver who was killed when a suicide bomber blew himself up on a bus in Tel Aviv in 2002. “A month and a half after I was born, my father was killed in a terrorist attack,” she said. “That day my father drove the No. 4 Dan bus. As he passed the Great Synagogue on Allenby Street, a bomb went off. My father recognized there was a terrorist and prevented him from getting on the bus, thereby saving the lives of dozens of passengers on the bus. I grew up in the reality of a fatherless life, only recognizing my father from pictures and stories and without a memory of a hug or a kiss from a father. A childhood without a father is a difficult childhood. The fact that my father is not with me physically is very difficult, but he is always in my heart. My father’s absence is felt particularly at important stages in my life, such as the first day of school, the transition from kindergarten to elementary school and the transition from elementary school to high school, and the significant stage in my life at the moment, knowing that he is not here to celebrate with me my Bat Mitzvah.”