Terrorists will stop at nothing to kill Israelis. One even disguised herself as a pregnant woman. Luckily, Israel’s security forces were a step ahead. 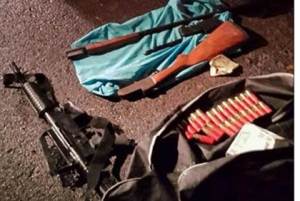 The Shabak (Israel’s Security Agency) announced on Monday that it had thwarted a massive terror attack planned to strike at the heart of Tel Aviv. Security forces arrested several Arab terrorists over the course of October and November who were planning a devastating suicide bomb attack.

Yasmin Sha’aban, 31, an Arab woman from Jenin in Samaria, was arrested in connection with the plot, along with four Arab residents of the Tulkarm area in their early 20s.

Sha’aban was the designated suicide bomber. She was supposed to carry out the attack with an explosives belt hidden in her clothes while disguised as a pregnant Jewish woman, the Shabak said.

Sha’aban intended to use an Israel-granted medical permit as a ruse to get into Tel Aviv and kill civilians.

The five were in touch with a terrorist operative from Gaza who gave them instructions on how to assemble explosives and carry out the attack.

The five admitted to planning the suicide attack as well as others, including the bombing of a bus carrying soldiers, shooting attacks and the kidnapping of an IDF soldier.

According to the investigation, Hamas and Islamic Jihad planned to claim joint responsibility for the attack.

Sha’aban and her accomplices were charged with terror-related offenses at a Samaria District Court.

A Shabak spokesman stressed that this foiled attack illustrates the high motivation among terrorists to carry out attacks, especially after Operation Protective Edge.

Furthermore, the investigation sheds light on the terrorists‘ methods of operation and their connection to the Gaza terror network.

Latest in String of Shabak Successes Israeli security forces exposed a massive Hamas terrorist plot and their taking down of the terror ring, a security official announced late November. Some 30 terrorists were arrested, including two Jordanians and one Kuwaiti national.

The terror network intended to target Jerusalem’s Teddy Stadium and its light rail system. Both attacks, if executed, would have caused massive casualties. The ring had also planned further infiltration attacks, kidnappings and car bombs.