Travel back in time to 1928 and see what it was like in the Old City of Jerusalem almost a century ago! A professional inspection identified the items from the Bar Kochba Revolt and the Roman and Byzantine periods. Watch and hear the lies disseminated by the PA - and, unfortunately, accepted by so many Westerners. The compromise, which may set a legal precedent against the other squatters, is a blow to Hamas and the Palestinian Authority. Israel is in a war that is difficult to identify, as there is no shelling by tanks and cannons or bombing by planes. Israel is a virus just like the coronavirus, Palestinian Authority TV tells viewers.

The seal, further evidence of Jewish Temple life in Jerusalem, was found during a soil sifting project, operated by the City of David in the Zurim Valley National Park. The EU did not detail what 'Palestinian culture, heritage and identity' it was relating to when inaugurating the Tourism Development Hub in eastern Jerusalem. Learn about the Holy Temples and why they were so special, how Tisha B'av is observed, and a general overview of Jewish mourning practices. 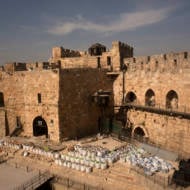 The Muslim world claims Jerusalem as a pinnacle of its religious aspirations – and its political interests this time are simply to rid the Middle East of Israel. After the elections, the cabinet slots in the Knesset have changed, and it might give organizations like Return to the Mount a fair chance to play their game. If you want to hear about a true 'occupation,' learn about Jordan's brutal grip on Jerusalem prior to its liberation by the IDF. Noam Chen and Jacob Bildner reveal historical sites in Jerusalem that are inaccessible to the public or literally hidden from sight. At the entrance to the historic Old City of Jerusalem, the walls of the ancient "David's Citadel" served as a stage for a nighttime show featuring a celebration of sound and light!