UN Secretary General Ban Ki-moon has called on international donors to raise over $100 million to solve the largest financial crisis in the history of the UN Relief and Works Agency (UNRWA) for Palestinian refugees.

The money is needed to start the 2015-2016 school year, he stated. UNRWA regularly operates at a deficit due to the failure of donors to come through with their pledges and the lack of political will to target aid-based on financial need.

“The Secretary General emphasizes that at a time when crises and human suffering are growing throughout the Middle East, it is imperative that UNRWA, a pillar of stability for a registered population of some five million Palestine refugees, is provided with the resources necessary to enable it to continue providing services, including education, for half a million Palestine refugee children,” said the official UN statement.

UNRWA held an extraordinary session of its Advisory Committee on July 26 to address the situation. “I am alarmed that our current funding crisis may force us to consider a delay in the start of the school year,” said UNRWA Commissioner-General Pierre Krähenbühl. “Education lies at the very heart of the identity and dignity of Palestine refugees and of what UNRWA stands for. Our schools also provide a measure of stability in a very unstable region. Possible delays in opening the school year would also have grave implications for host governments.” 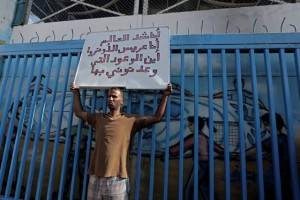 A Palestinian protests outside UNRWA headquarters in Gaza. (AP/Adel Hana)

The relief agency’s budget has been hit hard by the failure of international donors to respond to the crisis in Syria, where the Yarmouk refugee camp in Damascus has been nearly depopulated. Donors have also failed to respond to calls for funding for reconstruction in Gaza.

On a more basic level, UNRWA budget woes can be traced to a system that is designed to prevent Palestinians from integrating into host countries, in contrast to the aims of the UNHCR (Office of the UN High Commissioner for Refugees). For example, UNRWA runs schools in the Palestinian territories and Jordan, although the students in those schools hold Palestinian or Jordanian citizenship and should be eligible to matriculate into the local school system.

Furthermore, while refugee status ends after the first generation, according to UNHCR, UNRWA considers any descendant of a Palestinian refugee to be a refugee, regardless of the background of their other ancestors. The number of Palestinian refugees has been vastly inflated by the fact that refugee status is passed on to succeeding generations and is unaffected by citizenship from other countries, in contrast to every other refugee population in the world. UNRWA was founded in 1950 in order to provide humanitarian assistance to Palestinian refugees who fled Israel during the 1948 War of Independence, many at the urging of Arab governments or propelled by false rumors of Jewish violence. With the exception of Jordan, the Arab countries that took them in have refused to provide them with citizenship and keep them confined to refugee camps. Palestinian citizens of Jordan are also denied many privileges, including access to jobs in the government and military.