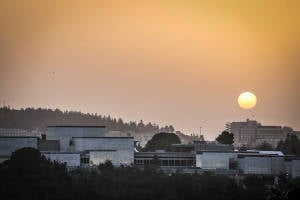 The world’s oldest complete copy of the Ten Commandments is on display in the Israeli capital as part of an exhibit tracing the history of civilization.

After displaying the world’s smallest Bible, the Israel Museum in Jerusalem will now reveal the oldest copy of the Ten Commandments in an exhibit tracing civilization’s most pivotal moments.

The 2,000-year-old Dead Sea Scroll, from a collection of the world’s most ancient biblical manuscripts discovered in the Qumran region, was never before publicly displayed in Israel and has only been shown in brief exhibits abroad, said Pnina Shor of the Israel Antiquities Authority (IAA).

The manuscript is so brittle that it will remain on display at the Israel Museum in Jerusalem for only two weeks before being returned to a secure, pitch-black, climate-controlled storage facility.

“When you are thinking about universal law, the universal principle of ethics, … this is the first law that comes to your mind,” exhibit curator Tania Coen-Uzzielli said.

The exhibit includes tools used in an elephant hunt 1.5 million years ago, the oldest known remains of a communal bonfire that took place 800,000 years ago, skulls from the oldest remains of a family burial and the world’s oldest complete sickle — a 9,000-year-old object that represents the transition from hunter-gatherers to settled civilization working the land.

These objects, framed in dramatically-lit cases in a dark exhibition hall, were all discovered in Israel, a testament to the region’s central role in human history. The museum is mounting the exhibit to mark its 50th anniversary.

“After only 50 years, we may be one of only very few museums worldwide that can tell such a broad story from its own holdings,” museum director James Snyder said.

A 5,000-year-old Mesopotamian tablet on loan to the museum and 2,700-year-old coins from what is now Turkey are also on display. An original handwritten manuscript of Albert Einstein’s groundbreaking theory of relativity caps the exhibit.