Israel’s President Reuven Rivlin met with leading US Senators in Jerusalem and emphasized the importance of Israel’s relationship with the US. 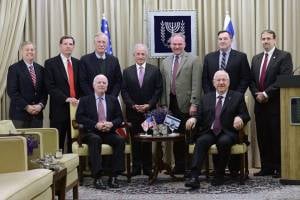 President Rivlin meets with a delegation of US Senators in Jerusalem. (Photo: Mark Neiman/GPO)

President Reuven Rivlin welcomed a delegation of Republican and Democratic United States Senators at his residence in Jerusalem on Sunday evening. The delegation, on an official visit to Israel, was headed by Chairman of the Senate Armed Services Committee, Senator John McCain (AZ).

Rivlin emphasized the importance of Israel’s relations with the US during the meeting, telling the Senators that “beyond any discussion, above any debate, is the importance of our relationship with the United States. Your support is not just words. You have supported an upgrade in the cooperation between our countries, and helped in so many ways, including with Iron Dome – which has saved so many lives.”

In December, Congress passed the US spending bill, which included $3.7 billion in military aid to Israel, one of the largest-ever American military aid packages granted to Israel, which began in 2011 and should amount to $1.2 billion for Iron Dome by the end of 2015.

Relating to the International Criminal Court’s (ICC) decision to probe Israel for alleged war crimes, Rivlin said it was “nothing less than a prize for terror.” “The State of Israel is committed to the highest standards of international law,” Rivlin stressed. “Making legal accusations against Israel, while there is no demand for accountability from the Palestinians is another victory for terror. International law must be clear not only about what a state cannot do, but also about what a state should do, in order to protect its citizens from terror.”

Rivlin told the Palestinian Authority (PA) that “instead of going to The Hague or the UN, come to Jerusalem. Come and talk directly to the Israeli government and people.” Senator McCain thanked the President for his warm welcome and said, “We have come from both sides of the political spectrum, Republicans and Democrats, as supportive friends of Israel. The relationship between our countries is of great importance.”

The Senators shared with Rivlin that they had been greatly impressed on their visit, and noted the importance of their visit to Yad VaShem Holocaust memorial earlier on Sunday, especially in light of the terror attacks in Paris. The Senators added they were aware and greatly appreciative of the President’s many efforts to preserve the value of equality between the citizens of Israel.

McCain recently warned that the Obama Administration is on the verge of signing “a very bad deal” with Iran regarding its nuclear aspirations.

Asked about the sanctions the West has imposed on the Iranian regime, McCain justified them even though they may be harmful to Iran’s citizens because “the Iranians have a long record of cheating, of concealing their nuclear capabilities. They continue to develop the warhead and the missiles to deliver nuclear weapons. We’re on the verge of – if the administration has its way – a very bad deal.”