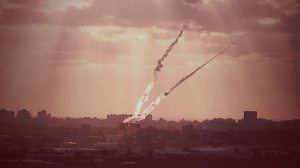 The Israeli Air Force (IAF) attacked a Hamas terror base in the Gaza Strip Saturday night for the first time since Operation Protective Edge.

The IAF target was a factory, which the army said was involved in the production of cement used by Hamas to rehabilitate its terror tunnel infrastructure. An IDF spokesman announced that the IAF hit their target accurately.

The IAF attacked in response to a rocket fired by Hamas terrorists on Friday. The rocket fell in open space, causing no injuries or damage.

The IDF announced it will not tolerate any attempt to hinder the security of Israel’s civilians. “Hamas is the address and is fully responsible,” the statement read.

In another incident, two Arabs crossed a border fence between Gaza and Israel Saturday morning, setting off an alarm. Unarmed, they were quickly caught and turned over to the Shabak (Israel’s Security Agency) for questioning.

Shortly afterwards, the navy fired warning shots at Gaza boats after they had entered a prohibited zone. No one was wounded. Prime Minister Benjamin Netanyahu stated that Hamas bears the responsibility for any escalation: “Israel’s security takes precedence over everything and I will not ignore the firing of even one rocket; therefore, the air force responded to this firing by destroying a cement factory that served to rebuild the tunnels that we hit in Operation Protective Edge. Hamas bears the responsibility for any escalation. We will safeguard Israel’s security.”

Defense Minister Moshe Ya’alon told IDF Radio that Israel’s deterrence against Hamas remains effective, and that “if we would not have achieved the deterrence during Operation Protective Edge, they would have fired every day.”

Alon Davidi, the mayor of Sderot, a southern city which for years has been suffering from rocket fire, demanded a stronger response to Hamas. “The renewal of the rocket fire on us reminds us that [Hamas] is a heinous and murderous terror organization that targets innocent civilians, in contrast to the European Union’s decision to take them off the terror organization list. We must not accept this fire, sporadic or otherwise. Hamas must understand, through the only language that it understands – force, that firing on Israel is not worthwhile and that it entails an unbearable price.”

By: United with Israel Satff