A comprehensive poll shows that the Palestinians consider their leadership corrupt and dangerous, but of course Israel is to blame, they say.

The Arabs living under the Palestinian Authority (PA) in Judea and Samaria and under the Hamas regime in Gaza appear to be more bitter than ever.

A poll conducted by the Palestinian Center for Policy and Survey Research (PCPSR) shows that most Palestinians are unhappy with their lives; that they wish to immigrate to another country; that they mistrust their leadership; that they believe they have no freedom, and that they support violence as the way to achieve their goals.

Strong Support for Hamas and War Against Israel

The poll shows that the popularity of Hamas and its leader, Ismail Haniyeh, remains higher than that of PA head Mahmoud Abbas and his Fatah party. The results further indicate that Hamas would easily win a new presidential election if one were held today. Hamas would also do better than Fatah in a new parliamentary election, possibly due to the fact that most Palestinians continue to believe that Hamas won the summer war with Israel.

With only a 35% approval rating, if presidential elections were to be held today and only two candidates were nominated, Haniyeh and Abbas, the former would win a majority of 53% (compared to 55% three months ago) and the latter 42% (compared to 38% three months ago). In the Gaza Strip, Abbas receives 44% and Haniyeh 54%. In Judea and Samaria, Abbas gets 41% and Haniyeh 53%.

A majority of 71% wants elections to take place within a few months, however, such elections are nowhere on the horizon, as the 79-year-old Abbas seems reluctant to relinquish power and has no apparent successor.

The poll clearly shows that an overwhelming majority of Palestinians, 77%, continues to support the launching of rockets from the Gaza Strip. 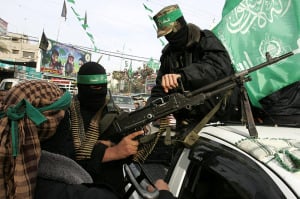 Interestingly enough, about two thirds (66%) believe that Iran, Turkey and Qatar combined have given the Gaza Strip the ability to remain steadfast against Israeli attacks and to be able to continue to launch rockets during the Operation Protective Edge.

Findings also show that the level of support for a return to an armed intifada remains high, an increase in comparison to a poll conducted three months ago.

Palestinians Disappointed with the PA

Deeply Dissatisfied with Their Lives

Palestinians are bitterly disappointed with their lives under the PA, the poll shows. They believe they have no real freedom under the PA and Hamas rule, and a large segment is contemplating emigration.

Only 10% of Gazans view theirs lives positively, and positive evaluation of conditions in the Judea and Samaria stands at 23%.

Many Gazans, 43%, would like to move to other countries and are actively doing so, while 23% of Palestinians in Judea and Samaria would also like to leave.

A staggering 81% perceive the PA as being thoroughly corrupt, a climb from 78% three months ago.

Only 21% say there is freedom of the press in PA-controlled Judea and Samaria, and 20% say the same about the situation in the Gaza Strip. Only 30% believe they can openly criticize Hamas and the PA without fear of retribution.

The majority of Palestinians do not believe that the Islamic State (IS or ISIS) terror group represents true Islam, and they support the war against it. However, the belief that it does represent true Islam was twice as common in the Gaza Strip in comparison with the PA-controlled areas in Judea and Samaria.

Three quarters of the Palestinian public believe that ISIS is a radical group that does not represent true Islam and 12% believe the opposite;14% are not sure or do not know. In the Gaza Strip, 19% (compared to 8% in Judea and Samaria) say ISIS represents true Islam. Of those who say ISIS represents true Islam, 61% believe that an Islamist movement loyal to the group should be established in the Palestinian territories; 36% oppose the idea.

Another recent poll shows that among the Arabs of the Middle East, Palestinians are the greatest supporters of Islamic State terror.