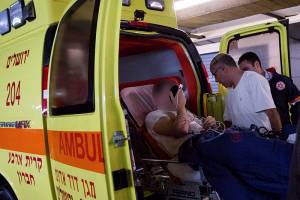 Paramedics wheel a wounded victim of a Hebron terror into the emergency room of Shaare Zedek Medical Center on Friday. (Yonatan Sindel/Flash90)

The current wave of Palestinian terror continues unabated. Four attacks took place on Friday and two on Sunday morning. By mid-day Sunday, six Israelis were listed in serious condition, and several others as lightly or moderately hurt.

Palestinian terrorists continue to attack Israeli soldiers and civilians in the current wave of violence that has intensified since the Jewish New Year in September.

Just after 11 a.m. on Sunday, an Israeli was stabbed and seriously wounded by a Palestinian terrorist outside the Jewish community of Beitar Illit, located between Jerusalem and Gush Etzion. The assailant, a female, was shot and killed.

At approximately 9:30 Sunday morning, a terrorist drove a car into a bus stop at the Tapuach Junction in Samaria, wounding four people, all in their 20s. Two of the victims were seriously hurt; another was moderately injured, and the fourth, who reportedly is pregnant, is in light-to-moderate condition. All were treated by Magen David Adom paramedics before being flown to Beilinson Medical Center in Petah Tikva, near Tel Aviv.

The terrorist, identified as 22-year-old Sleiman Shahin from Ramallah was shot dead by Border Police. Women and children join mourners at funeral for terrorist on Thursday in village of Halhul near Hebron. The Palestinian Authority glorifies terrorists as heroes. (Flash90)

An IDF soldier, shot by a 16-year-old Palestinian from Hebron at the nearby Beit Anoun junction at about 9:30 p.m., remains in serious condition at Hadassah Ein Kerem hospital in Jerusalem.

Earlier that day, inside the city of Hebron, a Palestinian terrorist shot two Israeli teens near the Cave of the Patriarchs in Hebron. A 16-year-old is in serious condition, and an 18-year-old suffered light wounds.

On Friday afternoon, a Palestinian terrorist stabbed and seriously wounded a 40-year-old man at an industrial park in Samaria, north of Jerusalem. The terrorist turned himself in to Palestinian police.

Just a few minutes before that attack, a 70-year-old female terrorist drove her vehicle into a group of IDF soldiers, who managed to shoot and kill the terrorist while remaining unharmed.

Click here for an updated chronology of Palestinian terror attacks since September 14, 2015.