Israel is experiencing one Palestinian terror attack after another. This time, the attack took place near Israeli police national headquarters in Jerusalem.

The latest attack occurred Monday afternoon on Bar-Lev Boulevard adjacent to the Israeli police national headquarters in Jerusalem when a female Palestinian terrorist assaulted a contingent of Border Police stationed on site.

A Border Policeman called on a female Palestinian to stop after she aroused his suspicion. In response, she attacked him with a knife and lightly wounded him. The policeman immediately shot the terrorist, critically wounding her. She was evacuated to an Israeli hospital in the capital.

The victim was taken to Hadassah Har Hazofim hospital to be treated for stab wounds in his upper body.

There are reports that another terrorist was apprehended by security forces during the incident. It is yet unclear what role he played in this severe incident. 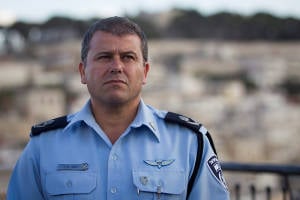 Jerusalem District Police Chief Commander Moshe Edri commended the security forces for their professional and swift response. “We will continue with our enhanced deployment in Jerusalem and act with decisiveness and rapidness against any terrorist who endangers life.”

This terror attack comes just hours after security forces shot and killed a Palestinian terrorist who tried to stab them while they stood guard at the Old City’s Lions Gate.

A similar attack occurred at this same site last Thursday during which an Israeli was critically wounded by a knife-wielding Arab terrorist while he was waiting for the light-rail train. The terrorist was captured shortly after by a police unit.