In the ongoing feud between Egypt and terrorists based in Gaza and Sinai, Hamas is demanding that the Egyptians stop flooding its smuggling tunnels.

The Hamas terror organization, which rules the Gaza Strip, has issued an official statement demanding that Egypt cease with its campaign to destroy the smuggling tunnels running from the Strip into the Sinai Peninsula.

Hamas announced Sunday that “contacts had been made with Egypt to stop the flooding of Gaza-Sinai border.”

Abu Zuhri also criticized Palestinian Authority (PA) head Mahmoud Abbas for his statements of encouragement for Egypt’s flooding activity. The two rival Palestinian factions have been waging a low-key war of accusations and even attacks over the past months.

Egypt, on its part, has sought to destroy the tunnels as part of an ongoing military campaign in the northern Sinai against anti-regime Islamic terrorists who, together with Hamas, have carried out several deadly attacks against Egypt’s security forces.

The Egyptian army has destroyed hundreds of smuggling tunnels as well as thousands of homes, and it evicted families from the border near Rafah, where it is creating a buffer zone with Gaza.

Hamas denies any connections to the Sinai-based terrorists.

Egypt at War with Sinai-Based Terrorists

In a related development, the Egyptian army announced Sunday that it killed 74 terrorists in the restive North Sinai province on Saturday, as an army raid targeting suspected terrorist hideouts entered its 13th day. 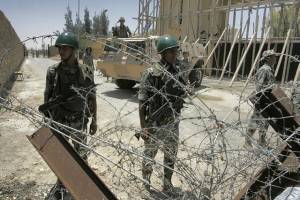 Egyptian soldiers on the border with Gaza. (Abed Rahim Khatib/Flash90)

Army spokesperson Mohamed Samir said on Facebook that the terrorists had exchanged fire with the military before being killed in combat. He said that 52 were arrested while 64 others were released after being cleared of terror accusations.

As part of the operation, 31 hideouts were discovered, Samir revealed, adding that the forces managed to destroy 16 explosive devices used for roadside bombings targeting military troops.

Egyptian forces have launched recurrent raids on presumed terror bases in the peninsula.

These terrorists have claimed responsibility for killing hundreds of troops since the overthrow of former Islamist President Mohamed Morsi.