Turkey is persisting with its damaging and dangerous ties with the Hamas terror organization. The U.S. has openly voiced its opposition. 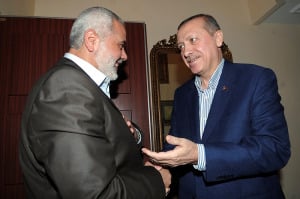 Mashaal met with Turkish President Recep Tayyip Erdogan on Friday and participated in the ruling AK Party’s congress held in Konya on Saturday. Prime Minister Ahmet Davutoğlu was seen holding hands with Mashaal at a political rally in Konya.

When asked about the Hamas leader’s visit to Turkey at a press conference on Tuesday, the Department of State’s press director, Jeff Rathke, stated: “Hamas is a designated foreign terrorist organization. Hamas continues to engage in terrorist activity and demonstrated its intentions, among other times, during this summer’s conflict with Israel. And we continue to raise our concerns about the relationship between Hamas and Turkey with senior Turkish officials, particularly after learning about Khaled Mashaal’s recent visit there.”

He added that “we have urged the Government of Turkey to press Hamas to reduce tensions and prevent violence. We raise this at senior levels with our Turkish counterparts.”

Asked whether he believes US concerns are being addressed in Turkey, given the invitation to the Hamas leader, Rathke replied: “I think you can draw your own conclusions from that. But certainly, we take Hamas as a terrorist organization very seriously.”

Speaking at the AK Party congress, Mashaal, as reported by Zaman, extolled the ties between Hamas and Turkey: “A powerful Konya and a powerful Turkey mean a powerful Jerusalem. God willing, God is with you and with us on the path to victory. A democratic, developed and stable Turkey is a source of power for all Muslims. Just as your people protected Jerusalem, the al-Aqsa Mosque and Palestine, we will again save Palestine and Jerusalem in the future as well.”

Zaman reports that Palestinian Authority head Mahmoud Abbas had complained to Turkey about their ties with Hamas during his visit in July. Israel expressed rage at Turkey’s support of Hamas terrorism. Israel lodged a complaint in November with the North Atlantic Treaty Organization (NATO) based on Turkey’s permitting Hamas to set up headquarters in the nation’s largest city and coordinate its operations against the Jewish State from there.

Minister of Defense Moshe Ya’alon conveyed a similar message to the U.S. during his recent visit there, telling Secretary of Defense Chuck Hagel: “Turkey is playing a cynical game. Hamas is supported by Qatar and Turkey, even as Turkey is a NATO member. It is unacceptable that the terror organization has two headquarters: one in Gaza and one in Istanbul.”