European nations are advancing plans to boycott Israeli products from Judea and Samaria, which will ultimately harm the Palestinians. The move to label Israeli products manufactured in Judea and Samaria before they are marketed in the European Union (EU) is unstoppable, EU High Representative for Foreign Affairs and Security Policy Federica Mogherini said. The EU wishes to label the products, thus singling them out for boycotting.

“European consumers must indeed have confidence in knowing the origin of goods they are purchasing,” EU foreign ministers had told Mogehrini. “Green Line Israel and Palestinian producers will benefit from this,” they claim.

Israeli sources say this is another method to pressure Israel on the diplomatic front.

Sources close to Prime Minister Benjamin Netanyahu reportedly said that Mogehrini did not mention the EU’s labeling plans during her recent visit to Israel, Israel’s The Marker reports.

The initiative to boycott Israeli products was made by Belgian Foreign Minister Didier Reynders and supported by those from the UK, France, Spain, Denmark, Ireland, Croatia, Malta, the Netherlands, Sweden, Portugal, Slovenia, Italy, Luxembourg, Finland, and Austria. 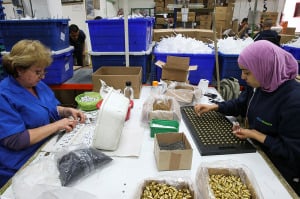 If the boycott goes through and the Israeli factories are harmed or forced to shut down, the first to suffer would be the Palestinian employees, who would be without a good source of income. As it stands, unemployment for Palestinians in Judea and Samaria is around 20 percent, according to the Palestinian Central Bureau of Statistics (PBS). Should demand for products from Jewish communities in Judea and Samaria decrease due to EU labeling, the unemployment rate among Palestinians is expected to rise.

According to data presented by the PBS, Palestinian employees, who work side by side with Israelis in Israeli factories, earn two-to-three times more than the average earned by the general Palestinian population, and they receive full social benefits as prescribed by Israeli law.

Israeli employers in Judea and Samaria have been repeatedly praised by the media for their outstanding treatment of Palestinian employees.