Europeans Call for Tougher Policies Against Israel in ‘Occupied Territories’

The group European Eminent Persons Group, which includes former leaders, is calling to take an even harsher stance against Israel.

A group of former European political leaders has called for the “urgent reassessment” of European Union (EU) policy on the diplomatic process between Israel and the Palestinians and insists that Israel “be held to account for its actions in the occupied territories,” the Guardian reports.

Writing to the EU’s foreign policy chief, Federica Mogherini, the European Eminent Persons Group, which includes former prime ministers, foreign ministers and ambassadors, also expresses serious doubts about the ability of the US to lead substantive negotiations between Israelis and Palestinians. “We have low confidence that the US government will be in a position to take a lead on fresh negotiations with the vigour and the impartiality that a two-state outcome demands…Hiding behind American leadership on the politics of the dispute is unedifying and unproductive,” they said.

Critical of the EU’s own policies, they asserted that past political and financial aid to the Palestinians has achieved nothing. 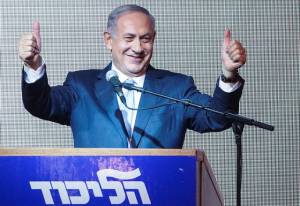 The group also argued that Prime Minister Benjamin Netanyahu’s reelection and his new government has made the issue even more pressing. “We are convinced in our own minds that he has little intention of negotiating seriously for a two-state solution within the term of this incoming Israeli government.”

“Europe has yet to find an effective way of holding Israel to account for the way it maintains the occupation. It is time now to demonstrate to both parties how seriously European public opinion takes contraventions of international law, the perpetration of atrocities and the denial of established rights,” the letter ominously read.

The letter also stated that the “EU should be united in support” of a Palestinian state if it is put to vote at the UN Security Council again.

The authors of the letter supported the initiative to label Israeli products made in Judea and Samaria and expose them to boycott and suggested “tougher measures to contain [Israeli] settlement expansion and steps to operationalise the EU’s policy of non-recognition of Israeli sovereignty beyond the 1967 borders across the full range of EU-Israeli relations.”

They further called for the EU to reassess relations with Palestinians and Israelis, making relations conditional on the “parties attitude to progress towards a two-state solution”.