Growing up, every single day was Holocaust Remembrance day for the daughter of two survivors. Now she beams with pride, living in the Land of Israel as her family continues to grow.

I will never forget the first time I heard the siren.

You will never believe where I was when I heard it, and I am a little embarrassed to tell the story…but I guess it’s my own tale of moving from slavery into redemption.

It was the spring of 1984. I was 19 years old and had spent the past eight months in Israel on a four-month Kibbutz Ulpan (intensive Hebrew language learning program) and a three-month army program.

A couple of weeks before Passover, a group of my friends invited me to join them on a trip to Egypt during the holiday break. Having grown up in Toronto in a traditional Jewish home, and being the daughter of two Holocaust survivors, I felt quite awkward going to Egypt during Passover. Something deep in my soul told me that Egypt wasn’t the right place for a nice Jewish girl to be during the holiday that celebrated the Jewish Exodus from Egypt, but my friends were going, and so I followed.

There is much to say about my Passover trip to Egypt, but this reflection is not about the trip, rather, it’s about the siren. I will say, though, that for me, Egypt was like an episode out of the TV series The Twilight Zone. There were many times during our stay there, that had me worrying that we could get kidnapped, pushed off a train or arrested, and nobody would ever find us again. I felt very uneasy and unsafe in Egypt. After two weeks of travelling, it was time to return to Israeli soil. Susie Stearn Eklove at the age of 19, touring Egypt. (Courtesy)

Needless to say, when we left Egypt and made it to the Israeli border, we were so happy. We went through the Israeli checkpoint, and once we were given the green light by security to enter Israel again, we were so relieved. Upon arrival, we threw ourselves on the ground, feeling free and grateful to back on the land that we trusted and where we felt safe.

As I sat down, my feeling of tranquility came to an abrupt, disturbing end. A loud, piercing sound emanated from the sky, surrounding us from all sides. It was a siren. All my Israeli friends stood up, lowered their heads and remained straight and tall without moving. The siren was unrelenting; it elevated in pitch and rattled me through to my core.

I began to panic. I had no idea what was going on. I looked at my friends and asked them what was happening. Nobody would answer or acknowledge me. They remained silent. I wondered if a war was breaking out or if maybe there was an attack. It felt like an eternity until the siren ended.

When it was over, my friends told me, in a matter of fact way, that it was Yom Hazikaron laShoah ve-laG’vurah (Hebrew for ‘Holocaust and Heroism Remembrance Day’), or simply Yom HaShoah.

It’s ironic. I grew up with two parents who were Holocaust survivors, yet I don’t remember ever hearing anything about Holocaust Remembrance Day. I didn’t go to Hebrew Day School past Grade Three; if I had, perhaps I would have been involved in yearly school assemblies. There was no Facebook to remind me or inform me, and until I was in university, when I became politically active, religiously observant and more involved within the community, I didn’t know about this specific day that commemorated the loss of 6,000,000 Jews.

For me, as a child and a young teen, every single day of my life was Holocaust Remembrance Day. Every day, I remembered that I didn’t have grandparents or a large extended family. My parents’ siblings, grandparents, aunts and uncles lived in my consciousness like a phantom limb, painfully absent, but somehow always in the air around me, reminding me that they were a part of me but no longer there. 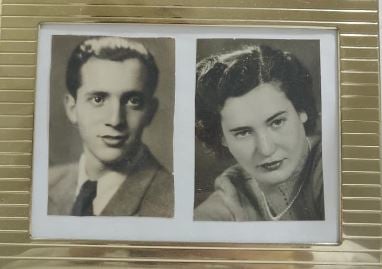 Every day I felt my parents’ trauma, and every night I lay in bed and spoke to G-d, begging Him to spare them from any more pain and suffering. Every day I prayed that some stranger would knock on the door and present themselves as one of my parents’ long-lost siblings or relatives. I replayed the happy imaginary reunions in my mind over and over again.

With the advent of the internet, I searched the web for people with the same last names as my parents, looking for any family members who may have survived. How I wished I could find my mother’s beloved sister Sala. Maybe she hadn’t really died. Maybe I could be a hero and somehow find her and reunite them.

So, when my Israeli friends told me that the siren was for Yom Hashoah, it didn’t really make much of an impact on me. I didn’t need a special day each year to remember. I had 365.

This morning at 10 a.m. my husband Harley and I, recent immigrants to Israel, sat in front of our computer waiting for the Yom Hashoah ceremony with our Ulpan (Hebrew language class) to begin on Zoom. I had volunteered to read a poem in Hebrew, and I sat with the text in front of me, nervously practicing it over and over again.

As the program began, the moderator kept announcing “5 minutes to Tzfira.” I kept wondering what “Tzfira” was. During this period of time between Passover and Shavuot, observant Jews do a daily count of the days between those two holidays. It is called “Counting Sfira.” I thought maybe she meant to say “Sfira,” not “Tzfira,” and I couldn’t understand why she was making such a big deal about it.

Again she announced: “Two minutes to Tzfira”… One minute to Tzfira.” I glanced at the poem nervously…would I be able to read it without making mistake? And then, out of nowhere, that sound that I last heard 36 years ago – after leaving Egypt and sitting on Israeli soil, so grateful to be home again – filled the air, surrounded our home and pierced through my heart. I wasn’t really expecting it. I didn’t realize that “Tzfira” meant “Siren” and that the moderator was preparing us for the jarring sound. This time, though, I knew just what to do.

Harley and I stood up. As I stood in my spot, I was flooded with visions, like a movie on fast forward. Thirty-six years of images unfolded to the soundtrack of the siren in flashes. I saw myself as the 19-year-old who made her way from the exile of Egypt to freedom, in the land of Israel, at a loss to what the siren around her was about. I saw everything in between: my ancestors who were murdered in the Holocaust, my parents who survived and the family that they raised, my wonderful husband, my beautiful children and grandchildren, a return to a life filled with G-d and Torah.

I swelled up with the pride, knowing that the Nazis didn’t wipe us all out. Here I am, after all, the daughter of two survivors, living in the Land of Israel. I imagined them smiling down on all of us and what joy they must feel as they watch our family grow and their family tree live on through us.

As the siren rang on, my eyes swelled up with tears, and I felt the room around me. I felt the Land of Israel under my feet, breathed in the air and felt G-d all around me. Harley reached out his hand and held mine as the tears rolled down my face. I knew that he, too, was feeling that we were so blessed to finally be here at home, in Israel, a dream that we have dreamt for so long.

I heard myself say: “Baruch Ata Adoshem, Elokeinu Melech Ha’Olam, Shehechiyanu, V’kimanu, V’higiyanu, Lazman Hazeh – “Blessed are You, Lord our G-d, King of the Universe, who has granted us life, sustained us and enabled us to reach this occasion.” As the wail of the siren came to an end, my prayer of thanks ended, and Harley answered my prayer of gratitude with a heartfelt “Amen.”