Iran and the P5+1 world powers have announced that a framework deal on Iran’s nuclear program has been reached. Israel is outraged, believing this deal will transform the world into a ‘much more dangerous place’.

The landmark framework deal sets the stage for a final comprehensive agreement to be reached by June 30.

On Twitter, US Secretary of State John Kerry described the conclusion of the recent round of talks as a “big day”, saying that the European Union, P5+1 and Iran “now have parameters to resolve major issues on nuclear program. Back to work soon on a final deal.”

The Times of Israel reported an Israeli official saying “This is a bad framework that will lead to a bad and dangerous deal. If an agreement is reached based on the guidelines of this framework, that would be an historic mistake which will transform the world into a much more dangerous place.”

In a phone call with President Obama, Prime Minister Netanyahu warned that “a deal based on this framework would threaten the survival of Israel. Just two days ago, Iran said that the destruction of Israel is ‘non-negotiable,’ and in these fateful days Iran is accelerating the arming of its terror proxies to attack Israel.” 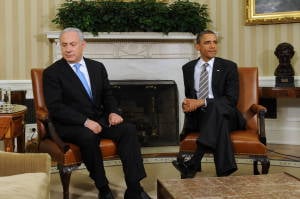 Netanyahu concluded that “This deal would legitimize Iran’s nuclear program, bolster Iran’s economy, and increase Iran’s aggression and terror throughout the Middle East and beyond.”

At a joint press conference with the European Union’s foreign affairs chief Federica Mogherini, Iran’s Foreign Minister Mohammad Javad Zarif said that we had accomplished “significant work” and that Iran will “continue enriching.”

While many key issues that were debated in the talks have not been resolved yet, many of the negotiators were positive about the results.

British foreign secretary Philip Hammond said in a statement that “this is well beyond what many of us thought possible even 18 months ago and a good basis for what I believe could be a very good deal.”

According to the parameters of the deal released by the U.S. State Department, Iran will reduce by two-thirds the amount of nuclear centrifuges, from 19,000 to 6,104, with only 5,060 of these able to enrich uranium. Furthermore, Iran has agreed not to enrich uranium over 3.67 percent for 15 years, far below the 90 percent enrichment needed for a nuclear weapon.

One of the most important key aspects of the framework deal is the breakout time needed for Iran to produce a nuclear weapon. According to the framework, Iran’s current breakout time is assessed to be 2 to 3 months, however, that timeline will be extended to at least a year for a duration of at least 10 years under the deal.

The framework also establishes regular access for inspectors from the International Atomic Energy Agency (IAEA), the U.N.’s nuclear watchdog. After the IAEA verifies that Iran has complied, the U.S. and E.U. will begin to lift nuclear-related sanctions. However, U.S. sanctions on Iran for terrorism, human rights abuses, and ballistic missiles will remain in place.

“If at any time Iran fails to fulfill its commitments, these sanctions will snap back into place,” the U.S. State Department said.

Behnam Ben Taleblu, a Iran research analyst at the Foundation for Defense of Democracies (FDD), told JNS.org that the framework deal laid out today “highlights both the achievements and shortcomings” of the original interim deal agreed to in 2013.

“While the specifications for the Joint Comprehensive Plan of Action (JCPOA) released by the State Department involve a host of technical modifications, key Iranian sites like the Heavy Water reactor at Arak and the facility at Fordow will not be shuttered. The centrifuge cap is also higher than I would have liked,” he said.

“While the West may see this as yet another necessary interim measure to reach a comprehensive accord, Iran continues to see this a victory, chiefly for the continuation of its nuclear program,” Ben Taleblu added.

Israeli Prime Minister Benjamin Netanyahu stepped up his opposition in recent days as the talks neared a framework, saying that it was “time for the international community to insist on a better deal.”