“Any sensible person knew Iran was behind the bombing of the Jewish center in Buenos Aires, and knew that Argentina’s president and foreign minister also knew it, even as they engaged in negotiations with the Islamic Republic to conduct a joint investigation into the attack,” Elliot Abrams, a former adviser US President George W. Bush said.

Elliott Abrams, a senior fellow for Middle Eastern Studies at the Washington, DC-based Council on Foreign Relations — who served as deputy assistant to the president and deputy national security advisor in the “Bush 43” administration — was responding to Monday’s leak of secretly recorded phone conversations in which Argentina’s former foreign minister acknowledged Tehran’s responsibility for the massive 1994 car-bombing of the Asociación Mutual Israelita Argentina (AMIA), the Argentine Jewish Mutual Aid Society.

The attack, the worst in Argentina’a history, left 85 people dead and hundreds wounded. It is believed to have been carried out by Hezbollah with Iran’s backing and blessing.

The 2012 recordings, released Friday by the Argentinian radio station Mitre, and reported by the Jewish Chronicle on Tuesday, are of former FM Hector Timerman trying to reassure concerned Jewish leaders that his and then-President Cristina Kirchner’s negotiations with Iran to jointly investigate the AMIA bombing are the best way to solve the case. 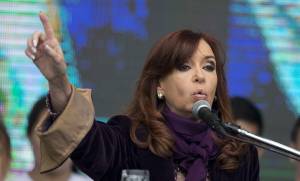 Abrams said it was obvious Kirchner and Timerman – who canceled his AMIA membership this year, due to the “obstructionist actions” of the Jewish institution – “had been lying all along, to curry favor with Iran.”

“The only thing new here,” Abrams told The Algemeiner, “is Timerman getting caught in the lie. This is a reminder that the Kirchner government was willing to sell out Argentina’s own citizens and let Iran off the hook for a murderous terrorist attack. That Timerman was part of this abandonment of Argentina’s Jewish community is especially disgusting —  but again, not surprising, given his record in office.”

In the first recording, Timerman is heard telling then-AMIA president Guillermo Borger, “I’m calling you because it hurts. It hurts me as a Jew to hear the critics from AMIA. And it seems that the best choice is to do nothing, and if we [the government] do nothing, the AMIA will be happy. But I’m doing this for AMIA.”

Timerman also said that federal prosecutor Alberto Nisman told him privately that he supported the negotiations, but after the signing of a memorandum of understanding between Argentina and Iran, Nisman asked a federal judge to declare it unconstitutional. (Nisman was found dead of a gunshot wound at his Buenos Aires home on January 18, 2015, under suspicious circumstances, which are still being investigated.)

In another recording, AMIA vice president Jose Scaliter takes part in the conversation between Timerman and Borger:

Borger: “We don’t regard Iran as valid [as a negotiating partner].”

Timerman: “And who do you want me to negotiate with, Switzerland?”

Borger: “I will just say that Iran lies, is not credible and denies the Holocaust.”

Scaliter: “We don’t tell you with whom you must negotiate.”

Borger: [Nisman] “carried out a serious and important investigation and says Iran did it.”

Borger: “… so I will trust him if they will present to the justice.”

Timerman: “So how do you want me to bring [the Iranian fugitives to Argentina]?…”

The recordings were provided by journalist Daniel Santoro, who used them in his recently published book Nisman debe Morir (“Nisman must die”).