A Kuwaiti paper claims to have details on a supposed Israeli plan to attack Iran and a subsequent, strongly negative, alleged US reaction.

A fantastic tale told by Kuwait’s Al-Jareeda news site claims that Israel had planned to attack Iran’s nuclear plants and that US President Obama threatened to shoot down the Israeli Air Force (IAF) aircraft so that a deal between the US and Iran would not be spoiled.

Al-Jarida quotes an “informed source” that revealed a frustrated Israeli plan to carry out a military strike against Iran’s program in 2014.

According to the source, after Israel understood that the White House was adamant on achieving an agreement with Iran regarding its nuclear program and that secret talks were underway between the two sides, Netanyahu gathered his top security officials, including Defense Minister Moshe Ya’alon and Foreign Minister Avigdor Liberman, to discuss the options.

After deliberations and discussions that lasted four nights, they reportedly agreed to entrust the preparation plans for striking Iran’s nuclear site with then-IDF Chief of Staff Benny Gantz. At the same time, reports say, a plan was set in motion to thwart the possibility of an agreement between the White House and Tehran, a deal perceived by Israel as a direct threat to its existence.

Al-Jarida reports that Gantz made preparations with the Mossad, Shin Bet (Israel’s Security Agency) and the director of Israel’s National Security Council, making comprehensive plans and alternatives to a military plan. 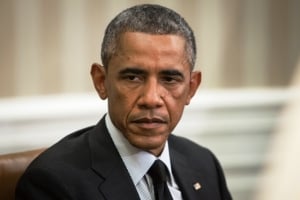 The Kuwaiti news outlet quotes another source ostensibly familiar with the preparations, saying that military exercises lasted weeks in order to ensure the success of the mission and that Israeli fighter jets and drones flew more than once into Iranian airspace from hidden bases in different countries, managing to penetrate Iranian radars. Objectives were set and plans were finalized, but one Israeli minister closely linked to the US administration, allegedly Liberman, divulged the secret plan to Secretary of State John Kerry, prompting Obama to contact Netanyahu and threaten to shoot down the Israeli planes before they reached Iranian airspace.

According to the source, Obama stressed that the US would view such an attack by Israel on Iran as “crossing all the red lines.”  Netanyahu canceled the operation and at this point, ties between Washington and Jerusalem began to deteriorate. The relationship between Netanyahu and Liberman also ended in mutual public criticism as a result, the source adds.

No other credible source is reporting this story.

The White House denied the Kuwaiti report on Sunday. The National Security Council (NSC) indicated the claim was as bogus as reports coming out of the nuclear negotiations with Iran about the content of an emerging deal between Washington and Tehran.

“Like a lot rumors lately about Iran talks, there is no truth to ‘reports’ about Obama & Israeli jets,” read a statement from the NSC’s Twitter account.

The NSC was alluding to Netanyahu’s claims that he knew the details of the deal between Iran and the US regarding its nuclear aspirations, and the Obama administration’s denial that the details were finalized.

There was no Israeli response to the report.