Republicans are hopeful that concern over Obama’s deal with Iran will translate into increased support by Jewish voters in 2016. 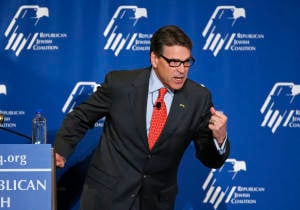 Republican luminaries and 2016 presidential hopefuls reiterated their support for Israel and skepticism about President Obama’s proposed nuclear deal with Iran as the Republican Jewish Coalition gathered Saturday in Las Vegas at the casino of mega-donor Sheldon Adelson.

Two Texans, US Senator Ted Cruz and former governor Rick Perry, spoke to an organization that’s boasting of growing membership but also anxious about an Iran deal that was repeatedly described as a threat to Israel’s existence.

“Will the subsequent maps of the world show a nation of Israel?” Cruz asked the crowd during his speech. “That’s what the stakes are.”

Cruz, famous for triggering the 2013 government shutdown, vowed to do “everything humanly possible” in the Senate to stop the nuclear deal. Perry said he also wants to stop the agreement, and he called for expanded defense spending, troops on the Polish border to contain a newly-aggressive Russia and a clear posture against Islamic extremism.

“This isn’t a call to war,” Perry said. “It’s a call to the type of strength that prevents a war.”

The coalition says its membership has more than doubled in the past two years, and donations are rising fast enough to guarantee its 2016 spending will exceed the $4.5 million it spent on ads opposing Obama’s re-election in 2012.

Republicans are hopeful that concern over Obama’s deal with Iran will translate into increased support by Jewish voters in 2016. “The political climate right now is very strong for us, and everybody here feels that opportunity,” coalition Executive Director Matt Brooks said.