A group of Democratic and Republican lawmakers met with Israeli leadership this week to reinforce the two nations' 'unbreakable bond.' When Nancy Pelosi met with Israeli President Reuven Rivlin, both figures touted the strong bonds between Israel and the U.S. Israelis gave America the highest favorable rating at 83 percent in a recent Pew Research Center poll. By JNS About seven in 10 Israelis have confidence in U.S. President Donald Trump and, compared to other countries, Israel gave the United States the most favorable rating, according to a new Pew Research Center poll released last... END_OF_DOCUMENT_TOKEN_TO_BE_REPLACED 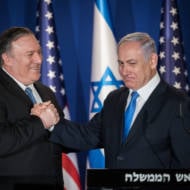 Netanyahu noted that such a pact would help Israel in case a military confrontation with Iran presents itself. Trump announced that he intends to explore a mutual defense treaty with Israel that 'would further anchor the tremendous alliance' between the two countries. 'Here's my message to the European leaders: Stop funding the very regime that is sponsoring terrorism against you and against so many others. Stop appeasing Iran.' Welcoming Haley to Israel, Netanyahu expressed gratitude for her defense of the Jewish state at a biased UN, where she always insists on telling the truth. Trump still plans to move the embassy to Jerusalem, the White House says. 'The question is not if that move happens, but only when.'