The number of terror attacks in Judea and Samaria has been rising in recent weeks, with many perpetrators linked to the Palestinian Authority’s military wing. 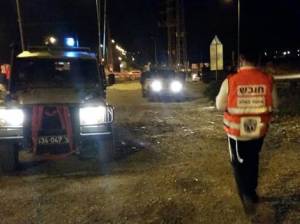 MDA medics at the scene of a terror attack in Judea on Saturday night. (Photo: Hezki Ezra)

Arab terrorists threw a Molotov cocktail on Saturday night at an Israeli car near Bethlehem, adjacent to the Hussan Junction in the Gush Etzion area of Judea, leaving the driver of the car suffering from moderate wounds.

After the firebomb exploded, inflicting damage on the car, a 40-year-old resident of Beitar Ilit driving the vehicle was inflicted with first- and second-degree burns, as well as a a cut to his head, apparently from a stone that was also thrown in the attack.

The wounded man, who suffers from burns, was treated by Magen David Adom (Israel’s medical emergency crews) at the scene, before being evacuated to the Hadassah Ein Kerem Hospital in Jerusalem.

Shraga Hoffman, deputy director-general of United Hatzalah, told Arutz Sheva: “When I arrived with other paramedics to the scene, we gave medical treatment to the car driver, who was suffering cuts from stones and burns from the Molotov cocktail.”

“According to reports, the driver arrived in the area to buy something at a local store and was attacked by several young Arabs. Large IDF forces have begun a search to locate them,” added Hoffman.

The Hussan Junction has been a problematic area in recent weeks, with Arab terrorists commonly targeting Israeli cars and buses with stones and Molotov cocktails.

While the identity of the terrorists remains unknown, the attack comes as the Al-Aqsa Martyrs’ Brigades, the military wing of Palestinian Authority (PA) Chairman Mahmoud Abbas’s Fatah faction, declared it would be increasing terror attacks on Israel. The terror group in Judea and Samaria has declared open war, followed by several shooting and rock-throwing attacks.

One terror incident involved Rabbi Moshe Levinger, a prominent Religious Zionist leader and one of the founders of the modern-day Jewish community of Hebron, who was injured in a rock-throwing attack on his car north of Hebron on Friday. He was among several Jewish motorists targeted as they traveled along Route 60, close to the Jewish village of Carmei Tzur. The rabbi was treated for light head wounds at Kiryat Arba medical center.

His son Malachi Levinger, head of the Kiryat Arba-Hebron Regional Council, condemned the attack, saying: “Terror has reared its head and dared to indiscriminately attack Jews in every city and settlement in the country.”

“It is important that those murderers know that every rock like this only deepens our roots here in the land of our forefathers, and every blow plants more firmly and strengthens our beliefs and our hold on the land,” he stated.