(THE KNESSET – JERUSALEM, Israel) The Jerusalem Declaration, stating support for the eternal, undivided capital of the Jewish state and signed by over 575,000 people from 168 countries around the world, has encouraged Israeli leaders. It was a pleasant coincidence that on the same day that United with Israel (UWI) presented Knesset Speaker Yuli Edelstein and Education Minister Naftali Bennett with a book of over half a million signatures of people from around the world, demanding that Jerusalem remain united as the eternal capital of the Jewish state, lawmakers approved a bill restricting any future plans to divide the city.

During the 1967 Six day War, when Israel was defending itself from the surrounding Arab nations determined to annihilate the Jewish state, the IDF achieved a miraculous victory, culminating in the reunification of Jerusalem, the ancient Jewish capital.

In a unique project, just ahead of Yom Yerushalayim (Jerusalem Day), this year celebrating the 50th anniversary of the reunification of Jerusalem, UWI accumulated over 500,000 signatures to the statement, “I declare that Jerusalem is the eternal capital of the Jewish People and support all efforts to maintain and strengthen a united Jerusalem as the undivided capital of the State of Israel.” The statement, named “The Jerusalem Declaration,” is historic in terms of being the largest display of grassroots support for a united Jerusalem. The ongoing online initiative can be viewed at www.jerusalemdeclaration.com.

UWI published a thick, 1124-page hardcover book, containing the Declaration along with an introduction and the hundreds of thousands of names and nationalities of the signatories.

Jerusalem Mayor Nir Barkat was the first to receive The Jerusalem Declaration book, when a delegation, headed by UWI founder and director Michael Gerbitz, visited his office in May, a few days ahead of the Yom Yerushalayim milestone event. Since then, the growing number of signatures, hailing from 168 countries, has reached 575,000. Special editions have been printed and given to other dignitaries, including, most notably, Prime Minister Benjamin Netanyahu and US President Donald Trump.

UWI attended separate meetings in the Knesset with Edelstein and Bennett, presenting each of them with the one-of-a-kind book.

Gerbitz explained to Edelstein that along with the growth of the BDS movement and increase in anti-Israel media bias and incitement comes an increase in pro-Israel sentiment as well. “We’ve found public support for Israel in every corner of the world – 168 countries,” said Gerbitz, “including Arab and Muslim nations.”

“168 countries! How did you do that?” Edelstein asked upon hearing of UWI’s success in reaching the masses.

“I wish we could do that at the United Nations,” quipped Edelstein.

Bennett told the UWI delegation that “there’s huge international pressure to hand over parts of Jerusalem to the Arabs, and we are not going to do that. Jerusalem has always been our capital for over 3000 years… but it’s also our destiny.” “Zion is Jerusalem. There is no Zionism without Jerusalem. That’s why it’s very heartening that over half a million people are giving us backing from 168 countries,” he said.

After receiving the book, Bennett flipped through the pages, faced the camera and called out some of the names to publicly thank them for supporting a united Jerusalem.

It was Bennett’s Jewish Home party that put forward the United Jerusalem bill which enjoyed coalition backing with 58 members of Knesset in favor and 48 against.

“I say to the United of Israel supporters, as Minister of Diaspora Affairs and Minister of Education of the State of Israel: We are going to stand strong. Jerusalem has always been and will always remain Israel’s undivided capital,” declared Bennett.

Gerbitz told Bennett he looked forward to the day when all 120 members of Knesset would stand up and express their unanimous support for an eternal, undivided Jerusalem under permanent Israeli control. 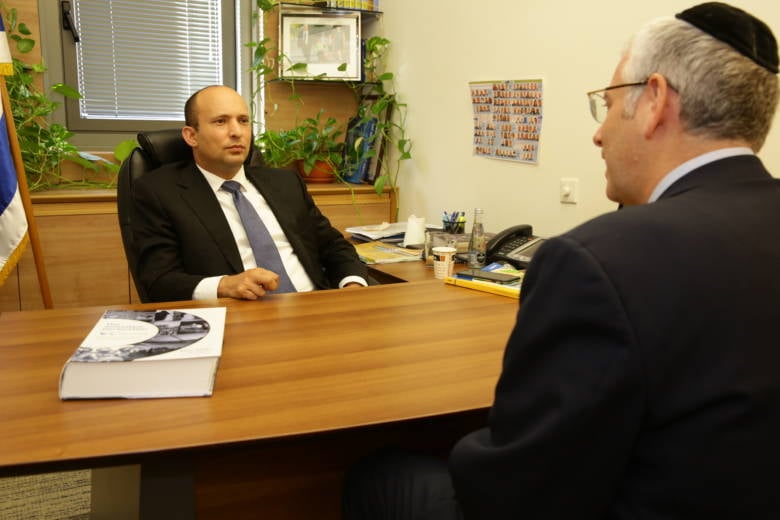