In what can be considered a dangerous, precedent-setting ruling, the US Supreme Court declared that the United States does not recognize Jerusalem – both the Eastern and Western parts of the city – as the capital of the state of Israel.

A US Supreme Court ruling on Monday gave support to the Obama administration’s position on the status of Jerusalem, ruling that as far as the US government is concerned, Jerusalem is not a part of Israel.

According to the ruling, Americans born in the city of Jerusalem cannot list Israel as their birthplace on their US passports, siding with the White House in a foreign-policy power struggle with Congress. The case appeared to be mixing a dispute between Congress and the president on the passport issue with the thorny politics of the volatile Middle East. Menachem Zivotofsky (C), flanked by his father Ari and and their attorney Alyza Lewin. (AP/Carolyn Kaster)

In Monday’s 6-3 ruling, the court said Congress overstepped its bounds when it originally approved the passport law in 2002, indicating that the US must allow Israel to be listed as the country of birth for a citizen born in Jerusalem.

The ruling ended a 12-year-old lawsuit by Jerusalem-born American Menachem Zivotofsky, 12, and his parents.

The law that the court struck down this week would have forced the State Department to alter its longstanding policy of not listing Israel as the birthplace for Jerusalem-born Americans. The policy is part of the government’s refusal to recognize any nation’s sovereignty over Jerusalem until Israelis and Palestinians resolve the city’s status through negotiations.

Justice Anthony Kennedy said in his majority opinion that the president has the exclusive power to recognize foreign nations and that determining what a passport says is part of that power.

“Put simply, the nation must have a single policy regarding which governments are legitimate in the eyes of the United States and which are not,” Kennedy wrote. “Recognition is a topic on which the nation must speak with one voice. That voice must be the president’s.”

In a separate opinion, Roberts cast the court’s decision as dangerously groundbreaking. “The court takes the perilous step — for the first time in our history — of allowing the president to defy an act of Congress in the field of foreign affairs,” he wrote.

Justice Clarence Thomas agreed with the outcome of the case, but on narrower grounds.

Robert Reinstein, former dean of Temple University’s law school, said the decision was significant because the court held for the first time that the president has exclusive power in an area of foreign affairs — recognizing foreign governments — even though the Constitution does not explicitly say so. On the other hand, Reinstein said, Kennedy went out of his way to say Congress retains substantial authority in providing money for embassies, imposing restrictions on trade and refusing to ratify treaties.

In the voting breakdown, the court’s four liberals, including the three Jewish justices, joined Kennedy’s opinion that sided with the administration and against the Zivotofskys.

This ruling may have ramifications on the struggle between Congress and Obama concerning the nuclear deal with Iran. The decision may impede on Congress’ ability to weigh in on the agreement with Tehran as an issue of foreign policy.

US policy has long refrained from recognizing any nation’s sovereignty over Jerusalem and has held that the city’s status be resolved through negotiations between the parties. Congress has for years tried to push the US administrations, whether Republican or Democrat, to recognize Jerusalem as Israel’s capital. The US never enforced the passport law, which has been on the books since 2002.

Former President George W. Bush signed the 2002 provisions into law but noted that “US policy regarding Jerusalem has not changed.” Obama has taken the same stance.

In 1995, Congress passed the “Jerusalem Embassy and Relocation Act,” which recognized Jerusalem as the capital of Israel. To date, a promise to move the embassy has not been fulfilled, due to opposition from the State Department and US presidents who have used their waiver authority. Each American president since Bill Clinton has signed a presidential waiver every six months in order to keep the embassy in Tel Aviv, citing concerns that a move to Jerusalem could hinder the peace process.

The Obama administration expressed satisfaction with the ruling. State Department spokesman Jeff Rathke said the decision simply confirmed the president’s longstanding authority in foreign affairs and added, “We remain committed” to the policy on the neutrality of Jerusalem.

“The decision also respects his ability to ensure that his determinations regarding recognition are accurately reflected in official documents and diplomatic communications, including passports,” Rathke added. While the administration was “not doing a victory dance,” it was glad that this remains clear, he stressed.

Reacting to the ruling, Alyza Lewin, who argued the case for the family, said the decision “highlights the central fallacy” of US policy on Jerusalem. “Presidents have been permitted by American public opinion to maintain, as American foreign policy, the absurd position that no country is sovereign over Jerusalem and that no part of the city, including the western portion, is in Israel,” Lewin said.

Saeb Erekat, a senior Palestinian official, viewed the ruling as a “very important decision” and “a clear message to the Israeli government that its decisions and measures in occupying and annexing Jerusalem are illegal and void and that it should immediately stop these measures because it’s a clear violation of the international law.” 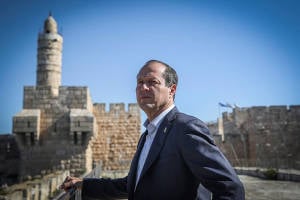 “We were optimistic and thought that the justices would see it our way,” he said.

“One of the things that now could be done – the court very clearly put this into the president’s lap, and basically said it’s up to him to change this policy,” he added, noting Obama now had “a very clear opportunity to do something concrete.”

He called on Obama to publicly declare “what has already been known for generations – that Jerusalem is the capital city of Israel, and Israel is the home of the Jewish people.”