Blog Spot Canada! Give Refugee Priority to the Most Needy: The Peaceful Yezidis Canada must give priority refugee status to the Yezidi, a tolerant people who have been experiencing genocide and are now on the verge of annihilation.

Canada has announced that it will absorb 25,000 Syrian refugees before the end of 2015.

It is good to consider welcoming all refugees who are in need, including migrants from Syria. However, the Yezidis are the most in need of help as refugees in safer countries!

Their children have witnessed 5,000 of their fathers, uncles and brothers massacred one year ago, as well as the capture and enslavement of over 7,000 of their mothers, sisters and aunts.

Older mothers, aunts, sisters (not useable as sex slaves) were massacred and dumped in mass graves, such as the one identified a few days ago in Sinjar.  Children starved to death if their families were able to flee to Mt. Sinjar last August.

Some children were captured by Islamic State (ISIS) with their mothers and then separated.  The mothers pleaded for their children and were then informed, after several days, that they – the mothers – had been eating the flesh of their children whom ISIS had murdered and fed to them as food!  The mothers committed suicide.

According to Mirza Ismail, chairman of the Yezidi Human Rights Organization-International, there are approximately 17,000 Yezidis right now on Mt. Sinjar. These include about 4,000 heroic fighters who have held off ISIS with no international help. There is evidence that the Coalition forces are prepared to support the Kurds in stealing the sacred Yezidi land of Mt. Sinjar and to do with the Yezidis what they wish. Last week a Yezidi fighter was killed by Kurdish forces when he voiced opposition to their order to take down the flags of the Yezidis who had cleared the town of ISIS.  There were eyewitness reports of the KRG escorting 300 ISIS fighters and family members away from Mt. Sinjar to safety.  Yezidis fear the final act of annihilation has begun, this time with the support of the Coalition. 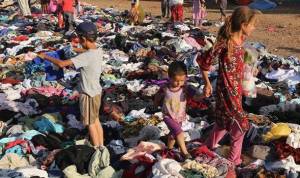 There are hundreds of thousands of Yezidis in camps run by Muslim Kurds – where the Yezidis are mistreated and in danger of attack by these Kurdish authorities and SI.  The Yezidis recount how the Kurdish forces had abandoned them to ISIS last year and even participated in the murder and rape.

Thousands of Yezidi girls were captured last year and are still being raped, enslaved and burned to death somewhere in ISIS camps or wherever their Muslim slave-owners are located throughout the Middle East!

Minorities in Dire Need of Refuge

The Yezidis and the Chaldo Assyrian Christians, Mandeaeans, Shebak, Turkomen and Bahai are minorities in the Middle East who are in the most dire and deadly circumstances.

The Yezidis of Iraq are a proud, peaceful, monotheistic and tolerant people who dating back more than 6,000 years. Mirza, who lives in southern Ontario, has been working tirelessly to try to:

1) Save the remnants of his People from cultural and physical annihilation in the camps;

2) Keep some part of their indigenous land – which was taken from them by ISIS and others and of which Mt. Sinjar is one of the sacred places; and

3) Rescue the thousands of young girls who are being enslaved and raped daily, without any questions by the World.

Canada must give priority refugee status to the Yezidi, a tolerant people who have been experiencing genocide and are now on the verge of annihilation.