Since the day they were born, each of Miriam Goodman’s seven grandchildren living in the south have been subjected to the terror of deadly Hamas rockets being fired at their homes and neighborhoods.

Since the Day They were Born, They Have Known Terror

“I have seven grandchildren who live on the same Yishuv [community] as I do,” Goodman told United with Israel in an email interview. “Since the day each one was born, they have known terror. My youngest [grandchild] was born three years ago at Soroka Hospital in Be’er Sheva during a rocket attack. The first sound this new baby heard was the wailing of the siren and a major boom. Nice way to be welcomed [in]to the world.”

Goodman’s home is in a small community in Israel’s south called Yishuv Ma’agalim; it’s five minutes away from Netivot, where she lived for several years, after spending her first decade in Israel on a kibbutz (collective community) in Gush Etzion in Judea. She is originally from Montreal, Canada, and has also lived in Hamilton, Ontario.

Yishuv Ma’agalim is situated just 9 km from the Gaza border, which means its residents have to be vigilant about security all the time. Newer houses have been built using reinforced concrete, and all homes built since 1991 have a mamad, a special fortified room for protection during a missile attack, Goodman explained. Some apartment buildings have a mamad that the public can use and the community also has public bomb shelters. Unfortunately, some of the poor or elderly members of the community still live in older buildings that are more vulnerable to attack, she said.

Young Children Afraid to Play Outside

“[Children] learn in fortified classrooms and, instead of having fire drills like children in North America do, they have Kassam [rocket] drills. Many times they cannot go out for recess [because] it is just too dangerous. Some of the younger ones are afraid to play outside.” 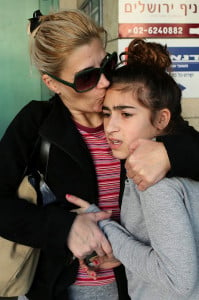 A mother and child react to a warning siren. (Photo: Nati Shohat/Flash 90)

The constant stress and worry have only gotten worse during the current onslaught of rocket fire coming from Hamas terrorists.

“We have had a crazy day today [Thursday]: four double sirens with about 12 booms before 9:30 [in the morning]. [On Monday] the Iron Dome [anti-missile defense system] took out three missiles over our neighbor’s house across the street from us. The debris started a fire on the moshav [farm] next door to us….

“When the siren goes, we have 15 seconds to get to safety. When the siren wails at night, parents have 15 seconds to wake up their children and get them into the mamad [safe room]. We have had grandchildren fall down the stairs because they are sleepwalking and [they] trip over their feet. Most times, kids don’t make it to the mamad on time; last week, my daughter was on the steps carrying her youngest when she heard the boom.”

A missile recently exploded in the field behind Goodman’s daughter’s house.

It’s Time to End the Terrorism

“The kids were sleeping and the siren woke them up. The boom terrified them. We can’t continue to live with rockets falling on our head. So there is a job [for the Israel Defense Forces and Israeli Air Force] to do and we have to put up with all the noise from our jets bombing the life out of [the terrorists]. We have to finish the job once and for all.”