Following its Facebook celebrations of the kidnapping of three Israeli teens, the Fatah movement, headed by Mahmoud Abbas, referred to the murdered kids as “soldiers” in its first reaction to the news of the discovery of the boys’ dead bodies, Palestinian Media Watch reports. 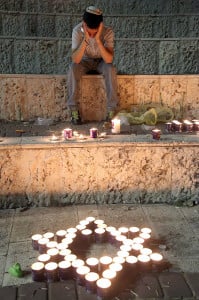 Fatah, the movement headed by Palestinian Authority leader Mahmoud Abbas, described three kidnapped boys who were murdered by Hamas as “soldiers” upon the announcement of their deaths Monday evening.

“Israelis crying over the three killed soldiers, whose bodies, according to Israeli claims, were found this evening in Hebron, 19 days after they disappeared.”

The boys were murdered by Hamas operatives.

Abbas, who had warmly welcomed terrorists released from Israeli prisons and whose government incites anti-Semitism and violence against Israeli civilians, is widely considered a legitimate peace partner.

Prime Minister Benjamin Netanyahu warned the world against recognizing the new Palestinian government and urged Abbas to break the partnership, which “will strengthen terrorism.”