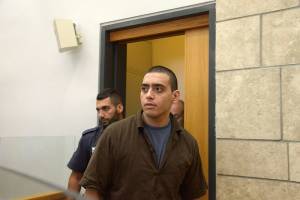 Marwan Khaledi, 20, seen at the courtroom of the Nazareth District Court on October 21, 2015, was sentenced to 3.5 years in prison on Wednesday for fighting with Islamic State (ISIS) in Iraq in 2014. (Basel Awidat/Flash90)

The growing number of Arab Israelis affiliated with the Islamic State terror organization, especially among the Bedouin, is of major concern to Israel’s defense and security officials.

An increasing number of Arab Israelis are becoming active on behalf of the Islamic State (ISIS) terror group, which is worrying Israel’s defense establishment, Ha’aretz reported on Wednesday.

Over the past year, there were several cases in which Arab Israelis were arrested for attempting to join ISIS in Syria or for disseminating ISIS propaganda. Israel has declared ISIS an illegal terror organization.

The Israel Security Agency (Shin Bet) is especially concerned about the spreading of ISIS ideology among the Bedouin population in the Negev. Four Bedouin teachers working in the Israeli school system in southern Israel, for example, were arrested by police and security forces in July for distributing ISIS propaganda among their students and other educators in the town of Hura in the Negev, near the Israeli city of Be’er Sheva.

As noted in the Ha’aretz report, ISIS has branches bordering Israel – in the Syrian Golan Heights to the north and in the Sinai peninsula in the south – making the possibility of activating ISIS cells among Arab Israelis a realistic threat. While most Arab Israelis, during the Second Intifada, did not carry out attacks on their own, but, rather, aided Palestinian terrorists, there were two recent cases of Israelis hoping to commit acts of terror on behalf of ISIS.

In October, seven residents of the north were indicted for establishing an ISIS terror cell and planning an attack on the IDF. Last week, another two Arabs with Israeli citizenship were indicted in a Nazareth court for supporting ISIS and planning a terror attack in Israel.

According to Ha’aretz, most ISIS supporters in Israel “are arrested at a relatively early stage, as soon as the first intelligence is received, to prevent them from carrying out attacks that could inspire more Israeli Arabs to join the organization. But that means the evidence against them is very limited, so the courts tend to impose relatively short sentences.”

On Saturday, ISIS leader Abu Bakr al-Baghdadi directly threatened Israel in a new, 24-minute audio message, saying they “are getting closer” every day. “Palestine will be your graveyard.”