Israelis across the political spectrum are united in support for the families of the kidnapped boys but disappointed by the weak international response. Mother of abducted teen Eyal Yifrach (L) and MK Shuli Mualem at the Knesset on Wednesday. (Photo by Hadas Parush/Flash90)

After returning to Israel from Geneva, where they met with the UN Human Rights Council, the mothers of the three kidnapped Israel youths – Naftali Frankel, Gilad Sha’ar, and Eyal Yifrach – went to the Knesset (Israeli parliament) Wednesday for a meeting organized by Member of Knesset Shuli Mualem-Refaeli. Members of every party except the Arab parties were present to show their support.

“I came here as a mother who is worried and can’t sleep at night,” said Iris Yifrach. “I am speaking to your hearts. Call for the government to keep acting and do everything to bring our boys back as soon as possible.”

Although there had been an earlier announcement about slowing down the search because of the upcoming month of Ramadan and world pressure, the intensive search continues. “We are turning over every stone,” a senior military official said earlier this week.

It is not an easy task. IDF soldiers continue to search every inch of the area surrounding Hebron. Economy Minister Naftali Bennett, a member of the security cabinet, praised the mothers for their efforts to gather both international support and continued support at home for the ongoing effort to bring their sons home as safely and as quickly as possible. Mothers of the three kidnapped boys, from the right: Iris Yifrach, Bat Galim Shaar and Rachel Frankel at a meeting with Knesset members on Wednesday. (Photo: Hadas Parush/Flash90)

“The government is hitting Hamas, its institutions, its money, and its activists,” said Bennett. He also denounced the Palestinian Authority’s transfer of salaries to terrorists in Israeli jails and has applauded the security cabinet’s decision to block these funds.

On Bennett’s Facebook page, he explains the PA system of paying imprisoned terrorists, who – as he points out – receive anywhere from 4,000-10,000 shekels monthly depending on the length of their prison sentence; the longer the sentence, the higher the salary. Not only do they receive a salary while in prison, Bennett explains, but those who are released continue to receive it.

“The money comes from various European and other countries that turn a blind eye and allow their money to fund terrorists’ salaries and pensions in a roundabout path through the PA or PLO,” he states, adding that he will work to “stop this perverse phenomenon.”

Meanwhile, continued efforts are being made to recruit international support for the safe return of the boys. 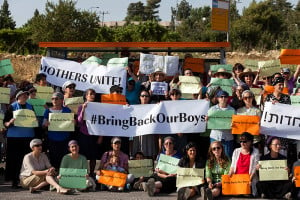 Israeli mothers gathered to rally in support of the three kidnapped teens last week at the Alon Shvut intersection where the teenagers were abducted. (Photo: Flash90)

MKs Nachman Shai and Ronen Hoffman, representing Israel at the Parliamentary Assembly of the Council of Europe (PACE) in Strasburg, are coordinating rescue efforts there. Members of PACE, including representatives from Britain, Poland and Norway, issued a statement on Wednesday calling for the immediate release of the kidnapped boys and urged all governments to work towards this goal.

While U.S. Secretary of State John Kerry had issued a statement saying that “the United States strongly condemns the kidnapping of the three Israeli teenagers and calls for their immediate release,” as of this morning, First Lady Michelle Obama reportedly has not responded to MK Aliza Lavie’s passionate video appeal for help in bringing the kidnapped boys home.  Neither has the US president issued any statement.

“I’m talking to you woman to woman, mother to mother,” Lavie said in her recorded plea. Please help us bring the boys back home to Israel.”

Whether Michelle Obama responds or not, the mothers of Eyal, Gilad, and Naftali will continue to do everything in their power to call attention to the plight of their sons.