Palestinian children are taught that death is a good thing. They are brainwashed into believing that Israel is the enemy and that Jews must be killed at any cost.

On Sunday, Palestinian Arab Abd al-Karim Nafith Hamid succumbed to injuries he sustained while standing at a Jerusalem light rail stop two days earlier. A Hamas terrorist ran his car into a group of people waiting at the station. A border police officer and 17-year-old yeshiva (school for Torah study) student were killed immediately and several people, including Hamid, were injured and taken to hospital. Site where an Arab man drove his car into a crowd of people waiting at a light rail station in Jerusalem. (Photo: Yonatan Sindel/FLASH90)

Even after several surgeries at Jerusalem’s Shaare Zedek Medical Center, Hamid succumbed to his injuries. When his widow was interviewed after his death, one might have expected her to discuss the futility of violence and the need to achieve peace. One might have thought she would blame the terrorist for having murdered her husband.

Yet she blamed Israel, first by claiming that her husband did not receive proper medical treatment. Then she backtracked, saying that yes, he had received treatment. Apparently, police initially thought he was a suspect and therefore transported him to the hospital in handcuffs. He was, however, treated by the doctors as are all injured people in Israel regardless of identity.

In fact, much to the dismay of many Israeli citizens, Israel regularly treats the family members of enemies. Most recently, for example, Hamas leader Ismail Haniyeh’s daughter was treated at Ichilov Hospital in Tel Aviv.

Israeli hospitals regularly perform heart and other life-saving surgeries on sick Palestinian children, frequently without charge. They do so with no strings attached. A reasonable person would think that the families of these children would be grateful for the treatment they receive, but all too often they are not.

In a 2010 documentary called Precious Lives, a Palestinian mother admits that her son received life-saving treatment but then goes on to state that she hopes he grows up big and strong and becomes a shahid (martyr, i.e. terrorist). 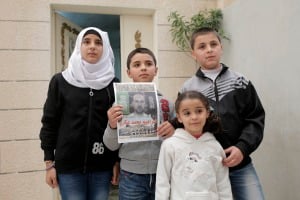 Family members of terrorist Ibrahim Akkari display his photo, showing him to be a martyr. He was shot after driving his car into a group of people at a Jerusalem light rail station. (Photo: Sliman Khader/FLASH90)

Such selfish, short-sighted goals are ubiquitous among Palestinians but are not the actual problem – they are a symptom of a much bigger issue.

Palestinians are taught from a very young age, through Palestinian Authority-sanctioned educational and recreational programming, that death is a good thing – they practically worship death, and they are brainwashed into believing that Israel is the enemy and that Jews must be killed at any cost. This blinds them from seeing the truth in what is going on around them. The Palestinian leadership is then able to manipulate them and use them as a fearless army in order to accomplish their ultimate goal to wipe out the Jewish people and erase Israel from the map.

Petition to the United States and European Union

We demand that all funding of the PA be stopped immediately. The brutal murder of Israelis committed by Palestinian terrorists throughout Israel is the latest result of ongoing PA incitement against Israeli citizens. Funding the PA means funding terror.