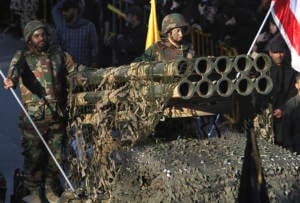 Hezbollah currently has a stockpile of over 130,000 rockets, more than the combined arsenal of all NATO countries, with the exception of the United States. And it intends to use them to attack Israel.

Any future war between Israel and Hezbollah will take a devastating toll on civilians due to the Iran-backed terrorist group’s practice of embedding its military assets in residential areas, Willy Stern wrote in the June 20 issue of The Weekly Standard.

Hezbollah currently has a stockpile of over 130,000 rockets, more than the combined arsenal of all NATO countries, with the exception of the United States. This number includes long-range rockets and M-600 ballistic missiles, which carry a high payload and would be able to “wipe out a good chunk of Times Square and maim and kill people four football fields away from the point of impact,” Stern noted. Hezbollah also has approximately 100,000 short-range rockets trained on schools, homes, and hospitals in northern Israel, which could potentially kill hundreds of civilians.

“You don’t collect 130,000 missiles if you don’t intend to use them,” said Matthew Levitt, an expert on counter-terrorism and intelligence at the Washington Institute for Near East Policy.

Hezbollah’s positioning of this weaponry in civilian areas poses a challenge to Israeli officers, added Geoff Corn, an international military law expert at the South Texas College of Law in Houston. “After exhausting all feasible efforts to reduce civilian risk, IDF commanders must resolve the decisive question: Is the potential for civilian harm excessive in comparison to the advantages the attack would provide? When you talk of an M-600 in the hands of an enemy that targets vital military assets or the civilian population—even if that apartment building is full—launching the attack will be necessary to mitigate the threat,” he explained. If Israel were to launch a strike in this instance, he concluded that “both legally and morally, the cause of these tragic consequences will lie solely at the feet of Hezbollah.” As such, “Hezbollah should be pressured starting today to avoid locating such vital military assets among civilians.” Otherwise “the instinctual condemnation of Israel will only encourage continuation of these illicit tactics.”

Stern explained that while Hezbollah has the manpower and weapons arsenal “of a nation-state…its tactics are those of a terrorist organization.” The destruction inflicted upon Lebanon in the event of war will therefore be massive, despite the fact that the IDF wages war in a cautious way to minimize civilian casualties. “The IDF’s warnings certainly go beyond what the law requires, but they also sometimes go beyond what would be operational good sense elsewhere,” noted Michael Schmitt, chairman of the Stockton Center for the Study of International Law at the U.S. Naval War College. “People are going to start thinking that the U.S. and other Western democracies should follow the same examples in different types of conflict. That’s a real risk.”

Israeli military officials in May 2015 told the New York Times that Hezbollah has “moved most of its military infrastructure” in and around Shiite villages, which “amounts to using the civilians as a human shield.” One senior military official added that Lebanese civilians are “living in a military compound,” noting: “We will hit Hezbollah hard, while making every effort to limit civilian casualties as much as we can…We do not intend to stand by helplessly in the face of rocket attacks.” Stern, who was shown classified IDF maps of the locations of Hezbollah weapons, said that they are not only being stored in these southern villages, but in Beirut itself. He added that he was provided access to these documents, as well as military simulations, strategic projections, and top IDF officials, “because Israel wants the world to know that (1) a war with Hezbollah in Lebanon will be, unavoidably, awful; and (2) the massive collateral damage won’t be -Israel’s fault. Even more than that, the IDF seems to be pleading to the international community: Do something. Stop Hezbollah. Before it is too late, and they drag the region into a bloody hellhole.”

Yaakov Amidror, Israel’s former national security advisor, met with UN Secretary-General Ban Ki-moon in the summer of 2013 and showed him “detailed evidence of Hezbollah’s deadly arsenal and the fact that it was strategically placed within densely populated civilian centers.” When Amidror asked Ban what the Israelis should do, he “offered no response and no suggestions.”

“Nobody, it seems, in times of peace is willing to offer Israel a constructive suggestion on how to deal with an Iranian-backed terrorist organization in possession of a massive arsenal on its northern border,” Stern concluded. “But these same organizations stand front and center to criticize Israel for acting legally and proportionately for protecting its own citizens in wartime.”