Israel’s security cabinet voted to accept an Egyptian-brokered ceasefire in the war against Hamas in Gaza, while the terror organization rejected it. 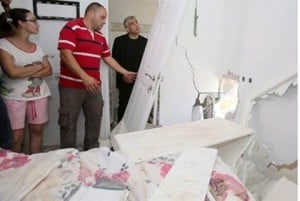 According to several Arab media sites, Hamas rejected the cease fire. It has fired several mortar shells and rockets at Israel since the ceasefire supposedly came into effect.

Several of Netanyahu’s Likud party members voiced strong opposition to accepting a ceasefire at such an early stage in the campaign. They believe that the IDF could do much more to decimate Hamas’s capabilities.

Minister of Transportation Yisrael Katz stated: “The rocket threat has not been removed and Hamas’s leadership was not annihilated. If we would have won, the world would have stood up and applauded. Ending the campaign in this fashion will bring immense pressure on Israel.” “Currently, the government is not doing enough to defend the residents of Sderot. This paralysis, this failure, this helplessness – must end.”

Member of Knesset Moshe Feiglin believes that this ceasefire grants a victory to Hamas. “A ceasefire after the bombing of all of the big cities in Israel invites the next round, in much more severe conditions,” he said.

Minister of Tourism Uzi Landau said that the cease fire conveys a destructive message and that Israel cannot point to any real achievements. “The Middle East is watching what is going on here, and organizations such as Al-Qaeda and ISIS are getting the message. We must restore our power of deterrence,” he declared.

Avi Issacharoff, a Middle East analyst, believes that the ceasefire is beneficial positive to Israel and basically points to a surrender by Hamas. He wrote in Times of Israel:

“The conditions in the Egyptian proposal do not include any of the demands that Hamas has been repeating day and night in the last few days. As reported in the Egyptian media, there is no mention in the proposal of Hamas’ oft-repeated demand for the release of the dozens of its operatives, freed in the 2011 Shalit deal, who were rearrested in recent weeks by Israeli forces in the West Bank in the wake of the murders of the three Israeli teenagers. There is also no concrete commitment regarding the opening of the Rafah border crossing or the payments of the salaries of Hamas’ 40,000 clerks in Gaza.” An Israeli teen injured by rockets from Gaza this week in Ashkelon. (Photo: Edi Israel/Flash90)

“If they accept the Egyptian proposal,” Issacharoff continues, “they will be perceived as having been heavily defeated in the latest round of conflict with Israel, a defeat that is close to a humiliation. Hamas’ problem is that if it rejects the Egyptian proposal, it will find itself unprecedentedly isolated in the international community and the Arab world. Cairo will accuse it of torpedoing the opportunity for calm, and Jerusalem will have the legitimacy to mount a ground offensive into Gaza. Thus the options open to [Hamas leader] Haniyeh, the military wing in Gaza and political bureau chief Khaled Mashaal in Qatar range from bad to worse.”

In total, over 1081 rocket have been launched at Israel during Operation Protective Edge; 845 of those rockets hit Israel. Approximately 191 rockets were intercepted by the Iron Dome missile defense system. The IDF has targeted over 1,576 terror targets, with both naval and aerial capabilities.