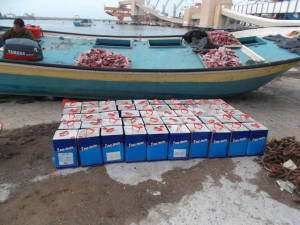 Israeli naval forces successfully intercepted a shipment of materials used for weapons production on its way to Gaza in January, an Israeli security official revealed on Wednesday.

The Navy, in a joint operation with the Shin Bet (Israel’s Security Agency), caught the vessel in the early hours of January 19, 2015 as it was on its way to the Gaza Strip from the Sinai Peninsula. The three boatmen were trying to smuggle liquid fiberglass, which is used to manufacture rockets and mortars.

The smugglers, Mahmed Bechar, Ahmed Zaidi and Awad Zaidi, were arrested and confessed that the shipment was intended for Hamas. The three revealed detailed information on previous weapon smuggling operations during their questioning. They further exposed Hamas’ plans to utilize fishermen as smugglers for future illicit operations.

On February 11, 2015, charges were filed against the three suspects in the district court in Beer-Sheva. They were charged with security-related crimes.

A Shin Bet announcement stressed that Hamas invests significant effort to develop nautical smuggling operations, especially after the Egyptian army destroyed its smuggling tunnels from the Sinai into Gaza.

Hamas has been working relentlessly to rearm itself and rebuild its army since Israel dealt it a strong blow during Operation Protective Edge.

IDF Spokesman Lt. Colonel Peter Lerner explained, “The IDF is determined to prevent unlawful attempts to ship weapons and raw materials that may jeopardize the wellbeing of Israelis. This shipment highlights that when Hamas chose to smuggle materials for rockets and mortars, it chose not to invest in the rehabilitation for the people of Gaza.”