An influential Lebanese-Canadian closely connected with the settlement of Syrian refugees was suspended from his position with a government-funded body for supporting Palestinian jihad.

Mohamad Hisham Khalifeh – a Canadian of Lebanese descent and founder, CEO and editor-in-chief of the Arabic-language Al Forqan newspaper‎, which is printed in Windsor, Ontario, and distributes about 10,000 copies – was suspended from his position with the Windsor Multicultural Council.

The Windsor Multicultural Council is a body that receives funds from Immigration, Refugees and Citizenship Canada and is intimately connected with the welcoming and absorption of Syrian refugees, CIJNews explained.

CIJNews reported last month on Khalifeh’s editorial lauding the Palestinian knife attacks aimed at Israelis as a “sacred duty of jihad,” following which B’nai Brith Canada, a Jewish human rights organization, urged the Ontario government to “launch a full investigation of the paper and particularly the offensive editorial.”

“This is a positive first step by the Multicultural Council while it investigates Mr. Khalifeh’s writings,” said Michael Mostyn, CEO, B’nai Brith Canada. “However, it calls into question how he was originally vetted for his position. To ensure that Syrian refugees are not exposed to radical Islamist ideology in Windsor, it would be prudent for the Council to re-examine the backgrounds of all of their staff and volunteers.”

‘We Do Support All Kinds of Resistance’

When asked by the Windsor Star to comment on his controversial editorial, CIJNews continued, Khalifeh was quoted as saying, “The editorial was saying we support Palestinians resisting the Israeli occupation. That’s the main thing… We don’t support any terror attacks on civilians… But we do support all kinds of resistance.”

The term “all kinds of resistance” used by Khalifeh is “doubly concerning, as in Jihadist parlance, the current campaign of so-called ‘resistance’ against Israel explicitly means murder and violence against innocent civilians,” Mostyn said. Canadian PM Justin Trudeau poses for a selfies while waiting to greet refugees from Syria at the Toronto airport on Dec. 10, 2015. (Nathan Denette/AP)

Since the start of the Jewish New Year in September, a total of 32 victims were murdered in Israel by Palestinian terrorists, and over 375 were wounded – 26 seriously. Most of the attacks in this current wave of violence were stabbings and car-rammings, although there were several shootings and explosions, as well as dozens of thwarted acts of terror.

“We encourage all concerned Canadians to contact their local Member of Parliament and demand that the government ensure that the resettlement of 25,000 refugees not be tainted by those who espouse support for terror,” Mostyn stated. “Al Forqan is not the only Arabic language newspaper to publish content which praises violence and ‘resistance.’ Syrians escaping the ongoing violence must not be subjected to hatred and radicalization as they attempt to start a new life in a free and multicultural Canada.”

In his editorial, Kalifeh said that the “Palestinian teenager is [standing] alone wielding a knife in his hand, defending the honor and dignity of every Arab and every Muslim, and moreover every person. He [the Palestinian teenager] does not accept the injustice in the face of the Zionist usurper.”

According to Kalifeh, “The Knife Intifada was born orphan from the womb of a bereaved mother, but the sons of this sacred place with the determination of the heroes will be mentioned in history of this nation that in the midst of the current events there was a group which recognized the right of the sacred duty of jihad… I’m asking Allah to give victory to the youths of Palestine and every freeman who does not accept injustice and shame.”

Poem Dedicated to ‘Mujahideen of Gaza and Palestine’

On November 12 ,2012, CIJNews writes, Kalifeh posted a poem spurring the Palestinians to launch armed attacks on Israelis, liberate Palestine and destroy the State of Israel. The Israelis, namely the Israeli Jews, are portrayed in Khalifeh’s poem as “infidels” and “morally corrupt people.” 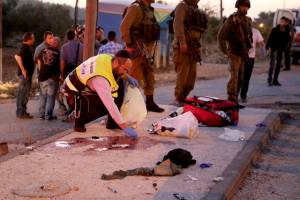 Security and rescue forces at the site of a recent stabbing attack in Jerusalem. (Gershon Elinson/Flash90)

Khalifeh recorded himself reading the poem and embedded the audio file in a video clip featuring armed Hamas operatives rockets from Gaza aimed at Israel and training to launch attacks on Israeli targets, CIJNews adds.

On November 18, 2012, he posted the video on his Facebook page with the caption: “The grandsons of [Omar] al-Mukhatr [conqueror of Jerusalem] – a poem dedicated to the mujahideen of Gaza and Palestine. We ask Allah to help them, to plant their feet firmly. I hope you like it.”

The National Post (NP) reported that David Robins, acting president of the Windsor Jewish Federation, sent a recent letter to members of the local Jewish community alerting them to the Arabic newspaper’s opinions.

“The Windsor Jewish Federation is very concerned about the report of this editorial that was published in Al Forqan,” Robins told NP. “We believe the celebration of violence in jihad poses a threat to the security of Windsor residents and undermines the values that make our community safe and diverse.”

By United with Israel Staff
(With files from CIJNews)