A filmmaker who was almost killed by a 2003 suicide bombing in Tel Aviv seeks answers from the bomber’s relatives in his new movie about the experience. The widower of Esther Horgan, who was brutally murdered in a terrorist attack while jogging near her home, talks about his wife's admirable qualities and how he wants her to be remembered. Another Islamic terror attack targeting Egypt's Christian minority left 11 dead ahead of the Orthodox Christmas celebrations. Simply because of their faith. 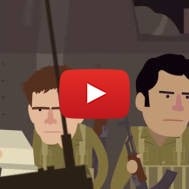 Relive one of the most daring hostage rescues in history, when IDF commandos stormed a Uganda airport to rescue over a hundred hostages.

Security footage from the recent supermarket terrorist attack at the Rami Levy grocery store in the Judea Samaria area has been released. An Arab terrorist stabbed two Jews at the Rami Levy Supermarket in Mishor Adumim, a short drive outside of Jerusalem. For one of UWI's very own staff members, this attack really hits home. Four Israelis died and eight others wounded on Tuesday morning in west Jerusalem in one of the worst terror attacks Israel has experienced in past years. An Arab terrorist rammed his car into pedestrians in Jerusalem Wednesday morning, wounding eight Israelis; three were critically wounded. Initial reports indicate that after mowing down passengers waiting at a train station, the terrorist continued driving while hitting cars along the way. At some point he hit a car and was unable to continue driving.... END_OF_DOCUMENT_TOKEN_TO_BE_REPLACED

A friend of Rabbi Yehuda Glick has spoken out about the attempted assassination. Watch this to understand why Glick was shot and to learn what he was fighting for. With a surge in terror attacks like the Jerusalem Light Rail murders and the attempted assassination of Rabbi Glick, emergency medical response time could be the difference between life and death. The response team must respond quickly and with the appropriate equipment.