During Passover, as we celebrate freedom from slavery and persecution and our return to the Land of Israel, we also look towards the future and the challenges.

These are the security threats facing Israel and its citizens as they celebrate Passover with their families.

The Egyptian Sinai has witnessed a revival of terrorist activities since the beginning of 2010. The wave of violence reached a peak level last year. The Ansar Bait al-Maqdis extremist militant group – which recently pledged allegiance to the Islamic State (ISIS) – has been active in the area, leading many attacks against Egyptian Security Force outposts spread out across the Sinai Peninsula, killing many in the process.

This resurgence of terrorist activity has forced the IDF to build a new security fence on the 200 km border between Israel and Egypt. The fence has recently been completed and is monitored 24 hours a day by the IDF’s highly trained personnel. Although it seems that the Ansar Bait al-Maqdis organization has chosen to focus its efforts on the Egyptian Security Forces, it may prove inevitable that they will try and attack Israel and the IDF troops standing guard on the border like other terrorist organizations have done in the past few years. 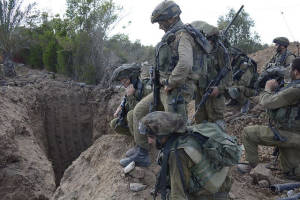 Both Hamas and the Islamic Jihad, the terrorist organizations in control of the Gaza Strip, have made significant efforts in the past months to rebuild their military capabilities destroyed by the IDF during Operation Protective Edge. Despite the lack of resources in the Gaza Strip, Hamas has allotted a huge amount of its funds, manpower and equipment to restoring its weapons arsenal. The military buildup is particularly shocking when considering the continuing delays in the reconstruction of the civilian infrastructure of the Gaza Strip. This clearly shows that Hamas’ main priority is the rehabilitation of its military and terrorist capabilities even at the expense of civilian needs.

Recruiting and training adolescents has also been one of Hamas’ top priorities. According to Hamas, the military training camps opened by the Izz ad-Din al-Qassam Brigades has trained more than 17,000 adolescents between the ages of 15 and 17. They received basic and advanced military training (including the abduction of IDF soldiers and exiting terror tunnels) as well as intense religious indoctrination.

Similarly, senior Hamas officials recently emphasized the need to open new fronts against Israel in the next round of fighting and has encouraged the surrounding Arab nations to join the fighting. Special emphasis was placed on Syria and Lebanon: senior Hamas official Mahmoud al-Zahar called on the authorities in Syria and Lebanon to permit Hamas to set up military units in the refugee camps. He asked these authorities to do so in order to “manage the resistance from northern Palestine and participate with us in the liberation [of Palestine].”

Furthermore, Hamas spokesmen have stated that during Operation Protective Edge, terrorists from the organization’s military wing already launched rockets into northern Israel from Lebanese territory, and implicitly called for the expansion of this phenomenon for the next confrontation.

Judea and Samaria: Renewal of Violence Since Operation Brother’s Keeper, and the kidnapping and murder of murder of three Israeli teenagers, Hamas has tried to rebuild its infrastructures of terror in the Judea and Samaria area. Regular arrests of terrorist cells planning to kill Israeli civilians have taken place.

As a part of the wave of violence that began last October, on the morning of November 18 five Israelis were killed and seven injured when two terrorists carried out a massacre during morning prayers at a synagogue in Har Nof, Jerusalem.

Another type of lethal threat that Israel has faced in recent months is car-ramming attacks that took place in Jerusalem and Judea and Samaria. These attacks have been praised by Hamas and amongst the Palestinian population on social networks.
Firebombs and stone-hurling have also continued throughout the past month. On December 25, a Molotov cocktail was thrown at an Israeli vehicle and caused severe burns to an 11 year-old Israeli girl and lightly injured her father.

Syria: The War Next Door

The UN’s peacekeeping force stationed in the Golan Heights on the Israeli-Syrian border that was taken hostage by the al-Nusra Front in September 2014 is a recent example of the nearness of the Syrian Civil War and terrorist organizations to Israeli territory.

The fighting around the town of al-Quneitra has caused the sporadic errant fire of rockets and explosives towards Israel. The last time such an attack occurred was on January 27, 2015, when two rockets hit Israeli territory. Sporadic fire in this area resulted in the injury of an IDF soldier in early September 2014. Earlier that year in June, a 15 year-old Israeli teenager was killed by an explosion along the border, in which two other individuals were injured.

Additionally, military aircraft have occasionally crossed into Israeli territory. On September 23, 2014, a Syrian Air Force airplane crossed into Israeli territory and was shot down by an IDF Patriot anti-aircraft missile. Earlier, On August 31, 2014, an unmanned aerial vehicle attempted to infiltrate Israeli airspace and was directly targeted by a Patriot anti-aircraft missile. Though Hezbollah is also present in the Syrian Golan Heights as a part of its military involvement meant to aid Bashar al-Assad’s regime in the Syrian Civil war, Hezbollah’s stronghold remains southern Lebanon. The terrorist organization has repeatedly used its infrastructure located in the area for lethal purposes.

On January 28, two IDF soldiers were killed in a missile attack that targeted their patrol on the Israeli side of the Lebanese border. Hezbollah claimed responsibility for this attack.

The attack revealed that despite UN Resolution 1701 – which stipulates that no armed forces other than the Lebanese Army should be present in southern Lebanon – Hezbollah has maintained its military capabilities in the area. Additional intelligence has estimated that Hezbollah maintains approximately 30,000 fighters, and a stockpile of 170,000 rockets pointed at Israel. Those rockets can reach any point on the map of Israel, and Hassan Nasrallah, Hezbollah’s leader, recently claimed that “Israel can’t even imagine the size of our arms stockpile.”

As Jews across the world and Israel plan to celebrate the holiday of Passover, it is important to remember that a number of threats still endanger the civilians and soldiers of Israel. Imminent hazards from the Sinai Peninsula in the south, Judea and Samaria in the east, and Syria and Lebanon in the north surround Israelis on all sides. Despite this, the IDF stands ready on all fronts to defend the Israeli population and Jews worldwide.