Netanyahu Flies to Rome to Ward Off Palestinian State Bid Netanyahu speaks with the media before boarding a plane to Rome. (Photo: Amos Ben Gershom/GPO)

Netanyahu flew to Rome in a last-ditch attempt to secure a US veto for the Palestinian proposal at the UN. Will the Obama Administration support Israel?

Prime Minister Benjamin Netanyahu took off Monday morning for Rome, where he was scheduled to meet with Italian Prime Minister Matteo Renzi and U.S. Secretary of State John Kerry. The purpose is to discuss the Palestinian resolution to the United Nations Security Council (UNSC) that would set a two-year deadline for Israel to “end its occupation.”

“The Palestinian leadership took a decision to go to the Security Council next Wednesday to vote on their project to end the occupation,” senior PLO member Wassel Abu Yussef told AFP after a meeting in Ramallah.

The U.S. has already opposed this deadline, saying that it further complicates the stalled peace negotiations.

Kerry arrived in Rome on Sunday where he met for more than three hours with Russian Foreign Minister Sergey Lavrov, seeking to thwart the looming damaging bid. Kerry will fly to London on Tuesday to meet PLO negotiator Saeb Erekat and Arab League chief Nabil al-Arabi.

France, Britain and Germany are reportedly discussing another proposal, but a senior U.S. official told Reuters there was no consensus among them.

“The Palestinians are trying to get without giving anything,” Defense Minister Moshe Ya’alon told IDF Radio, “They won’t be able to get anything without us.”

IDF Radio speculates that the Palestinian proposal will not receive the required majority at the UNSC. A French proposal, which is being worked on, has a better chance of receiving the needed approval, but it is unknown when it will be submitted. 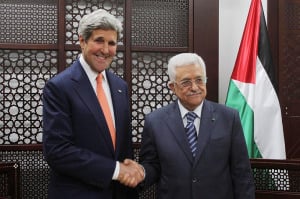 Israel said it hoped the U.S. will veto any moves at the UN to set a time frame for its withdrawal from Judea and Samaria, but a senior U.S. official said it was too early to say, Reuters reports.

Reuters elaborates that European diplomats feel that the U.S. may be open to accepting a resolution devising a binding, unspecified, time frame, but a senior U.S. State Department official said that Washington had not yet decided that a Security Council resolution was the right way to go.

“These things are all very much in flux, it’s not as if we’re being asked to take a position on any particular Security Council resolution right now. It would be premature for us to discuss documents that are of uncertain status right now,” the official told Reuters.

The unnamed senior U.S. official told Reuters that the common objective was to reduce tensions and try to coordinate with the various parties. “We all want to keep open the hope of a two-state solution and we all want to prevent to the best of our abilities an escalation of the violence on the ground.” However, “The Palestinian draft through the Jordanians contains a hard deadline for the withdrawal from the West Bank of two years, so that is not the way we would look at handling a very complicated security negotiation by simply mandating a flat deadline of two years.”

Israel’s Strategic Affairs Minister Yuval Steinitz told Ynet: “I assume an anti-Israeli proposal will draw a U.S. veto. That’s how it’s always been, and that’s what we hope will happen.”

Netanyahu: We Will Not Accept Diktats

Netanyahu told his cabinet on Sunday that the resolution and its two-year deadline were dangerous. “This will bring the radical Islamic elements to the suburbs of Tel Aviv and to the heart of Jerusalem. We will not allow this. We will rebuff this forcefully and responsibly. Let there be no doubt, this will be rejected.”

Listen to Netanyahu’s Remarks Prior to Boarding his Plane to Rome:

Prior to boarding the plane, Netanyahu stated: “In recent years we have rebuffed recurrent attempts to dictate conditions to us that would have harmed Israel’s security and which are incompatible with genuine peace. This time we will not accept attempts to dictate to us unilateral moves on a limited timetable. In the reality in which Islamic terrorism is reaching out to all corners of the globe, we will rebuff any attempt that would put this terrorism inside our home, inside the State of Israel. I will make this unequivocally clear. We will stand firm in the face of any diktat.”